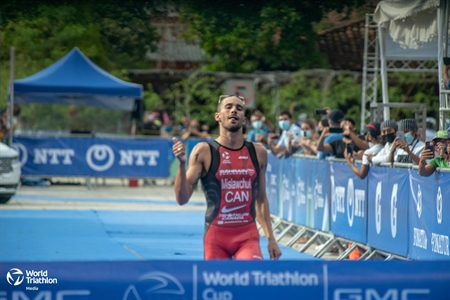 The Bahrain Endurance 13 are back to their winning ways, taking three golds and a silver over the weekend.

Tyler Mislawchuk took his second consecutive World Triathlon Cup Huatulco title, returning to the top of the podium amid a stacked field in what is the last race of the Olympic qualification period. With the temperature in Huatulco similar to the Tokyo summer, performing well here would be a good sign of fitness. He won this event the last time it was held in 2019 during his lead-up to winning the Tokyo test event.

He emerged from the 750-meter swim within the lead group, but attacked through transition to get out in front at the start of the 20-kilometer bike leg. The pack stayed together until the bike-to-run transition, making the 5-kilometer run the decider.

Mislawchuk put on the afterburners to take a clear win ahead of the rest of the field.

“I worked with my [Canadian] teammate Matt Sharpe. We set up the race like we want to in Tokyo: out the front, control the race, and then get off and rip a quick run,” he said post-race. “I’ve trained so hard over the last 19 months. I haven’t been home in 14 months because of the restrictions; I’ve been living out of one suitcase. Something that the fans don’t know is I’ve dedicated my whole life to this. Everything goes into it.”

In other triumphant race results for the Bahrain Endurance 13: Henri Schoeman won the Africa Triathlon Championships in Sharm El Sheikh, Egypt, while Cassandre Beaugrand and Javier Gomez raced the series opener of the French Grand Prix de Triathlon in Dunkerque, taking first and second in their respective events.

Next weekend the focus returns to long course racing, as Holly Lawrence heads up a strong field at Ironman 70.3 Des Moines before heading to Denmark for the Ironman 70.3 European championships the following weekend.