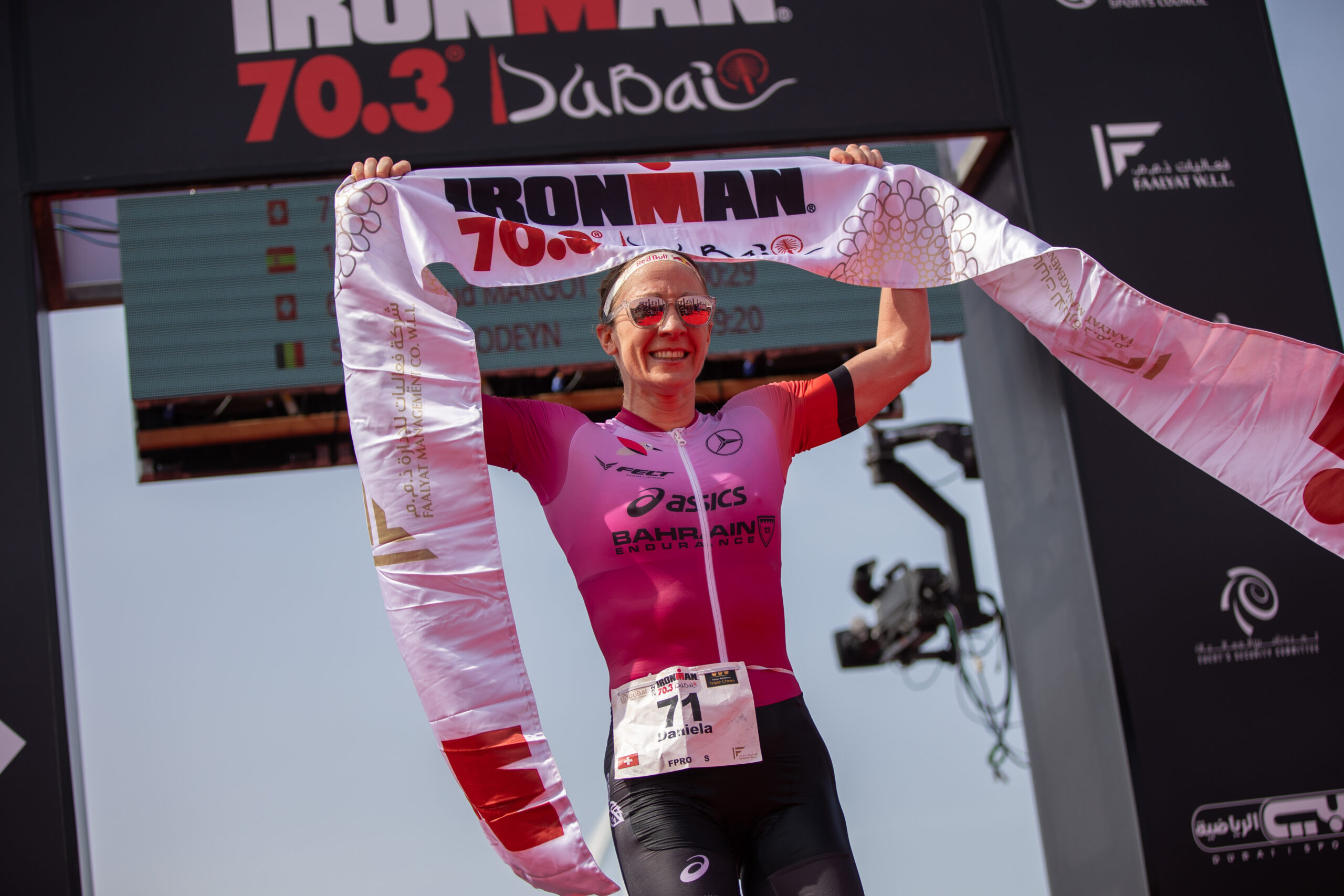 Back to business for Ryf in Dubai

Daniela Ryf has once again taken the crown at the Ironman 70.3 Dubai, setting a new course record with a time of 3:56:54.

After more than a year of no racing, the Swiss speedster built into her final position over the 1.9-kilometer swim, 91-kilometer bike, and 21-kilometer run. Exiting the water in 26:39, Ryf had an 8-second gap to Imogen Simmonds that put her in 6th place within the lead pack.

Within the first 20 kilometers, Ryf rode herself into 2nd place. Simmonds put on a surge going into the halfway mark to grow her lead by almost two minutes, but Ryf stayed with her and applied pressure through the home stretch to take the day’s fastest bike time of 2:08:36.

The two athletes entered the bike-to-run transition virtually at the same time, though Simmonds was first onto the run. It was here Ryf wrested the lead and solidified her grip on it, breaking the finish tape more than five minutes ahead of the rest of the field with a 1:16:50 half marathon.

“I was so happy to be able to race again. It’s been a long time, so to jump in that water and get going with the other girls was a good feeling. It felt like I’m back to doing what I’m supposed to do, in my natural surroundings,” said Ryf post-race.

“I decided to go to Dubai because it’s quite close to Europe; it’s only a six-hour flight straight from Zurich. And I really enjoy being here. I’ve had really good races here, so definitely it’s a place and a race which has good memories.”

Not content sitting on her laurels, she dove into analysing her performance. “On the bike, I was struggling a little bit to get that cadence up, and feeling comfortable in the time trial position took me a while until I was warmed up. Imogen really pushed it hard, she rode really strong so I think I had some good competition out there to get me out of my comfort zone and getting back to that feeling of race pain… I think there’s still room for improvement and I can take some knowledge from that race. In general the run was a very fast run for me, and I’m really happy with my performance.”

Looking forward to the rest of the season and world championships, Ryf revealed, “At the moment I’m focused on just getting some good races through this season. I feel like I’m in good shape and I want to build up from that now. It feels like showtime again.”

All eyes now turn to Challenge Miami halfway across the globe, where Jan Frodeno lines up in his own season kick-off.