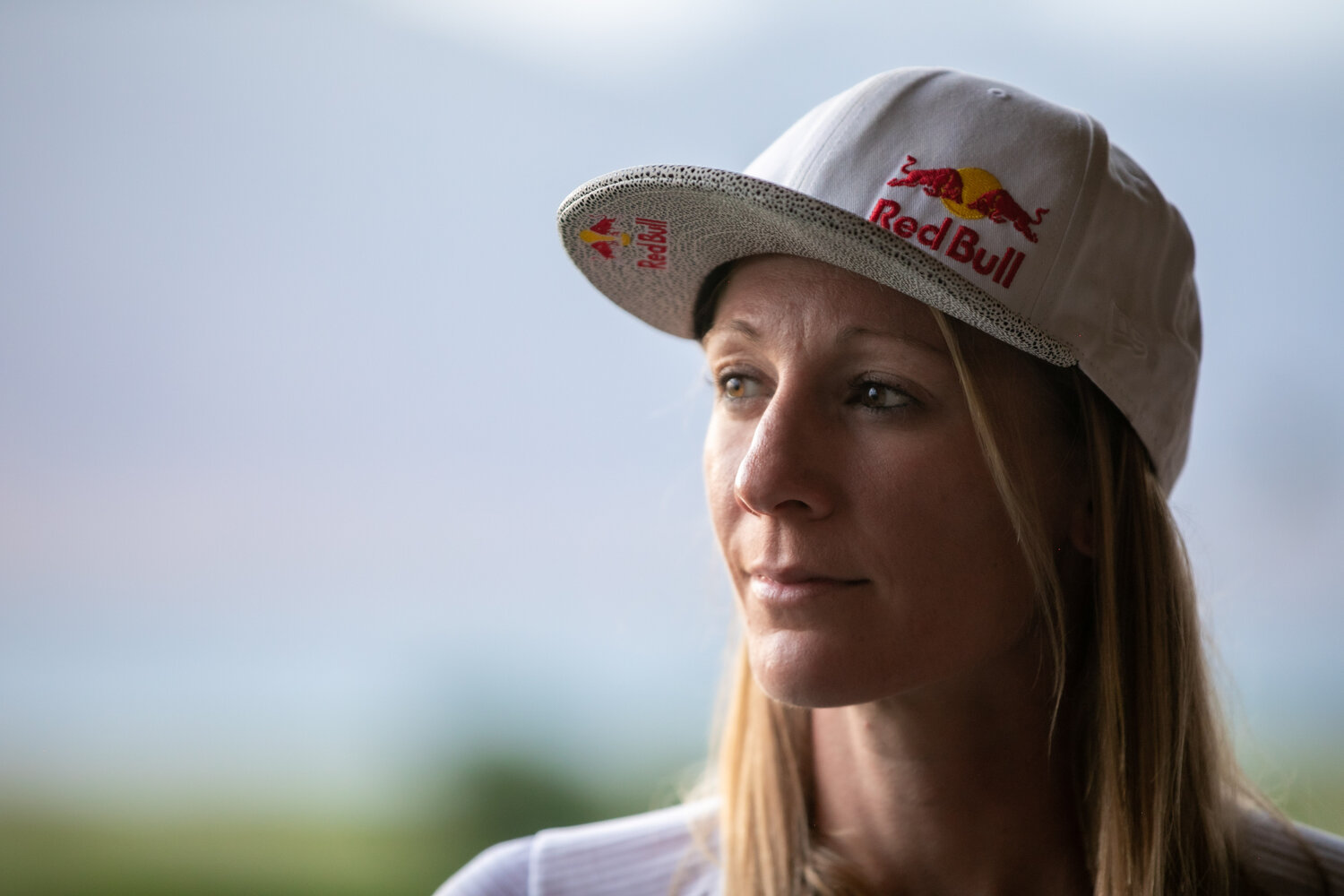 Daniela Ryf – the drive and passion by Jodie Cunnama

As Daniela Ryf gears up for yet another defense of the Ironman and Ironman 70.3 World Championship crowns, Jodie Swallow-Cunnama profiles her Bahrain Endurance teammate to understand what drives her and makes her such a formidable competitor among all athletes male and female on the race course.

As I sit waiting for Daniela Ryf I make a little bet with myself as to when she will arrive.

You can usually predict an athlete. You get your ‘early type’; ‘The Pleaser’ is over enthusiastic, animated and keen (read: me).   There’s two versions of ‘late type’. ‘The Casual’ is late by accident and usually so warm and charismatic that their tardiness is quickly forgiven. ‘The Ego’ is late by design, the rather more irritating, calculated type. Their lateness can range from a few controlling minutes to outright disrespectful hours, and one’s tolerance to them (unfortunately but inevitably) increases exponentially with their results and fame.

Daniela Ryf may be the greatest triathlete of all time. She is definitely the best female. By a country mile. I’d wait a long time for a meeting with Daniela. But I won’t have to, she’ll be right on time.

Now, Daniela and I have a history. In 2014 it was Daniela who prevented me from re-claiming the Ironman 70.3 World title, relegating my best-ever performance into second place in Mont Tremblant. It was that victory that marked the start of the Ryf era in triathlon.

‘I don’t think counting titles makes any sense – it’s about how you achieve a title. It’s all about the race you show and that’s what I will try to keep doing – bringing something to a race and enjoying myself.

Daniela may not count but I will.

Looking back at that first Championship in 2014, I realise that I may have been one of the informed few to understand back then just how good Ryf was. I had huge respect for her talent and achievement that day (with a little anger at my ex-coach for coaching her to beat me) but predominantly, and frustratingly, I had utter respect for her racing style. She worked with me on the bike. She shouted at the lazy in the group. Ultimately, she spat them out the back. She left me until last but on that ride she could have distanced anyone she wanted to, whenever she wanted to.

She was brilliant as a racer and grew to be very frustrating as a competitor. Defeatist as it may seem, after that race every time Daniela raced I expected her to win – including against me.

She hasn’t proven me wrong, spare a few bad races. Are they the ‘cracks in her armour’, her ‘Achilles heel’? No. Mistakes made are quickly converted into lessons within the Brett Sutton camp. Those minor losses prevented complacency and procured the need for rest and recuperation; they helped further cement the athlete/coach relationship; they kept Daniela humble and hungry and her coach certified and proven in his job.

But if the rest of the world believes Ryf to be a ‘sure thing’, Ryf herself is one who does not.

‘Even before Frankfurt I am not sure I am going to win, I am not that sure in a race at all as so many things can happen and you still have to deliver and that’s what I try to focus on.’

It is cliche to suggest a top athlete has an acute humbleness or naivety to her own ability, but that is not an accurate reading of Daniela. What I depict is very confident and logical analysis when it comes to races and their results; prospective and reactive. Occasionally something, or someone, prevents her from winning, but she is always capable.

Speculation, anticipation, even consideration of the unproven, is not part of the psyche. She is ‘Swissly logical’, without the abrasive edge. So cogent it takes you by surprise. She just doesn’t do ‘fuss, frills and niceties’. A strong attitude, resolute confidence and emotional clarity are balanced with a modern style of femininity that centres around athletic prowess. In fact Ryf conducts herself within the hegemony of sport very well. Well, perfectly really, given she beats most of the men.

‘As a woman it makes me proud to show that Ironman is a sport that women are actually really good at. If you compare finishing time percentage on the whole thing it is quite a small percentage and Ironman is actually suited to women so of course it then makes me very proud represent us as strong and fast as the men.

‘I have this goal to see how close I can get to the men. I think the women haven’t actually reached their absolute potential yet, possibly even the men haven’t, but I still think I can improve and that’s what keeps me motivated to improve. To compare with the men is far more accurate to compare performance than comparing times.’

These are revolutionary statements but entirely backed by performance. Daniela’s most recent 3:57:55 ‘Ironman 70.3 World Record’ at Ironman 70.3 Gdynia would have seen her finish 7th in the professional men’s field, just as her course record of 8:38:44 did at Ironman Frankfurt. It is not just the female field that fears Daniela’s presence; the males are anxious and threatened by her too.

Not that I sense Daniela cares about what anyone thinks of her. That is not said in a derogatory way but in an empowering one. So immersed in her own process, Ryf is consumed by her own needs and wants, not by those of people around her. Her nickname ‘Angry Bird’ was originally a tease – derived by her coach poking her tendency for stern face and tunnel focus. ‘Angry’ however, implies aggression or combative behaviour that is very absent in Ryf. Conversely I judge her to be quite ambivalent towards others – distant and detached.

‘Maybe it’s a bit of a shield, a barrier I put up, to be stronger. In a race it’s only about how you perform (in a fair way), not about how you act otherwise. Having the focus, being in that zone, in that tunnel, that helps me be the best I can be.’

Ryf’s confidence in and commitment to her process is beyond any I have seen in sport. Often whole immersion in a lifestyle is seen as unhealthy, but with Ryf it seems her natural disposition to subjects that she enjoys. She fixates about her pursuits and refuses to see any issue in doing that. If you get into the topic of food science (her recently finished degree), flavourings and marketing, she is equally as enthusiastic as talking racing. Her passions are genuine, if somewhat all-consuming.

Ryf displays abundant self-esteem, with strong resolve to trust in her beliefs, her talent, her plan and her coach without question. Her surety shakes my core. If Daniela could even comprehend the doubts, worries, concerns and anxiety that transpire in my head around racing I’m sure it would similarly blow her mind that I can produce any kind of race performance.

‘I feel it more like a compliment if people expect I will win. I don’t feel like I have to prove anything anymore. I’ve shown I can handle the pressure with three times winning Kona so now I can just go out there and show the best performance for me.’

In 2016, following a 8:22:04 clocking in Challenge Roth, Ryf’s brand adopted the hashtag mantra #flywithpassion. Ironman Frankfurt that year had been a letdown – Ryf had had to withdraw with hypothermia early on the bike. Challenge Roth offered an opportunity to mitigate that lost performance. She had no problem converting it into another huge win. Brilliant there, and equally impressive only a week later in Ironman Zurich, Ryf realised what really motivates her into achieving in triathlon – not titles, not times, but joy.

‘I feel like if you do something you love you can be very good at it. In Roth in 2016 I had had an awful race in Frankfurt so I went to have fun and enjoy myself and that’s what I did. I realised that if I race like that, then I got much more out of myself. I didn’t try to prove anything. (Well, maybe in Zurich because I had to show it there.) Roth was just fun and that’s exactly why I started in triathlon. It’s the only reason. It’s why I do little races too and it’s quite easy to lose that if you become super-focused. It’s not about fame or times, it’s about doing what I love.’

Many champions get consumed by the experience of winning, the adrenaline, the fame and the money. They mistake that feeling for happiness. When it ends (and it always has to end) they feel unfulfilled and disappointed by the end-products of a career that demanded the sacrifice of ordinary life, of family, of love, of stability throughout.

Ryf articulates her comprehension of that fallacy quickly and voluntarily. Fundamentally her happiness comes from life, not from racing. Winning satisfies her but does not define her. She knows her life is racing but equally that racing is not life.

‘I always enjoyed my life, even before all this I always liked to spend time with my friends and was happy living my life.

‘Winning gives you joy – that satisfaction that you worked for something and it happened, that’s an incredible feeling and I’m sure I’m a little bit addicted to it. Everyone who does professional racing must know that feeling. Then I won the million and of course you are happy for a little while but then to be honest it didn’t change much. I have more people helping me with things but otherwise I wouldn’t say much changed.’

It is natural for us to study successful sportspeople, to try and understand their prowess, to emulate their success and compare our own failings or mistakes against their very highest standard.

Despite and through her astronomical success, fame and fortune, Ryf’s ability to compartmentalise her focus remains resolute. On camp, Ryf lives, breathes and sleeps the process of athletic excellence and is entirely fulfilled doing so. There has been no change with result or season, she does not rage against the mundane process that foundation fitness requires, nor question her ability or need to race year round. She does not deliberate the future. She does not spend time on unnecessary energy expense such as doubt or worry.

My time with Daniela surprised me and quite unexpectedly irked me. An interviewer’s role is that of an instigator, of a listener and contemplator. I wanted to portray Daniela. But in doing that I feel like I have exposed a chasm of inadequacy in my own psychology. She is absolutely, and singly focused on her career.

END_OF_DOCUMENT_TOKEN_TO_BE_REPLACED