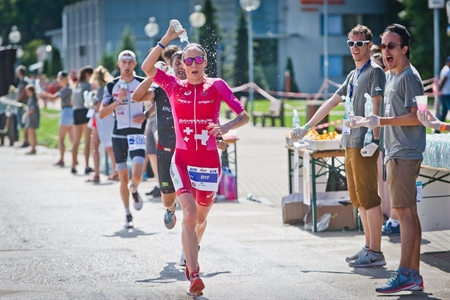 Daniela Ryf took the wire-to-wire win at Ironman 70.3 Gdynia, her fifth consecutive win this year. With her time of 3:57:47, she finished nearly 23 minutes ahead of the rest of the women’s field.

With only two minutes’ gap between the professional men’s and women’s gunstarts, it wasn’t long before Ryf started overtaking the male field on the bike course with a 2:12:27 split. This put her in sixth overall off the bike and more than 17 minutes ahead of the nearest woman. But the Swiss speedster had still more to give and continued to increase her lead over the half marathon until she broke the tape.

Ryf said: “Today, again, I’m happy with everything. The swim was good and on the bike course I was surrounded by men and could push the pace from the beginning.

“The run also felt good without any problems so I’m happy to have invested a lot in running recently.”

The only uncertainty before the race was whether Ryf could start with her material after her luggage was misplaced and didn’t arrive until close to midnight the night before the race.

Meanwhile, Ben Hoffman returned to racing at his hometown race Ironman 70.3 Boulder. The American had taken a four-month hiatus to recover from back issues after competing at the eight-day ABSA Cape Epic mountain bike race in a team for Ironman Foundation, as well as walking to a 21st place finish at Ironman South Africa two weeks later.

Hoffman’s return to form was evident as he steadily crept up the leaderboard after emerging from the swim in seventh. By the end of the bike leg he was in third place and within striking distance of the win. First place came down to the wire in a finish-line sprint, where Callum Millward beat Hoffman out by a mere two seconds.

Only a week after winning Ironman Canada, Brent McMahon put in a valiant effort to take 14th place at Ironman 70.3 Philippines.

The Kona march continues for each of them.

END_OF_DOCUMENT_TOKEN_TO_BE_REPLACED

Vincent Luis has kicked off two consecutive weekends of long-course racing with a win at Clash Daytona.