Germany, June 18, 2021 – German triathlete Jan Frodeno has challenged his Canadian counterpart Lionel Sanders to a head-to-head showdown in an in real life race over the long distance of 3.8km Swim; 180km Bike; and 42.2km Run. The dual, set to be held in Allga?u, Germany on July 18, 2021, will epitomise the pure essence of the sport – one man against another.

Frodeno, the current Ironman® World Champion, was keen to test himself ahead of his planned world championship defence in Kona, Hawaii in October 2021.

The idea of this one-of-a-kind triathlon battle was created to showcase THE PERFECT Race and THE PERFECT dual. The event will be broadcast globally, with a production level you would expect of any large sporting event. The live broadcast of this unique event will last over eight hours and will be a showcase of these two great athletes in action. The broadcast will also feature the unique imagery and picturesque surroundings of this ‘postcard’ German region as well as esteemed guests, expert panellists, first class analytics and, of course, virtual components. Further details will be announced in the next four weeks.

“This no distractions head-to-head battle is what sport is about,” says Frodeno. “I have the highest respect for Lionel and the idea of racing him motivates me to get up every day and continue to improve; take myself to the next level. He is the rising star of our sport, but I am not willing to step down just yet. Lionel is an incredible athlete and one of my fiercest competitors. He was more than up for the challenge.” Frodeno continues: “Allga?u has always represented a happy place for me. I raced here on my birthday previously, and I am extremely grateful for the assistance they have already provided us in making this event possible.”

In this first of its kind sporting event, these two fierce rivals will battle it out in 3.8km, four lap swim in Grossen Alpsee Lake; followed by a 180km closed and fast time trial bike leg made up of five loops. This incredible head-to-head battle will culminate with a 42.2km marathon made up of four 10.55km circuits around the scenic landscape of Allga?u. All long distance international triathlon rules will be adhered to – no drafting, no illegal tactics, no outside support or pacemakers. That said, the intention of the race is not only to inspire the endurance community, but to reach a much wider audience.

“This event is the opportunity of a lifetime,” says Sanders. “I have spent 10 years honing my head-to-head racing abilities. I don’t think anyone has as much experience as I do in mano-a-mano type racing. So to get the opportunity to showcase my biggest strength against the best guy in the world is truly an opportunity I cannot pass up. A victory over Jan would likely be the highlight of my entire career.”

The venue of Allga?u, Germany was chosen because of its picturesque backdrop, the huge support and interest we’ve already received from the community and authorities and its low population density. It is also an extremely fast course and spectacular location, providing the perfect contrast of pure performance in one of the most beautiful areas Germany has to offer. “

“We are proud to get this idea off the ground and we have a vision we are working on day and night from now until the event,” says race organiser Felix Ru?diger. “We had many race organisers and brand partners reach out, excited about the potential of an event,” adds Ru?diger, who is also Frodeno’s manager. “We have chosen to partner with ZWIFT to put together a stand alone race, free of distractions and other competitors so that we can focus solely on the IRL battle between Jan and Lionel. We will announce more great partnerships and details soon.”

Lionel Sanders is a four time Ironman® Champion and 30 time Ironman® 70.3 Champion. He has won the ITU Long Course World Championships and has finished 2nd at the Ironman World Championships. In 2016 he broke the Ironman® World Record in Arizona with a time of 7:44:29. Lionel uses triathlon as an outlet to test and explore his physical and mental limits, and his mission is to inspire others to do the same.

Zwift is the fitness company born from gaming. The app connects wirelessly to exercise equipment: bike trainers, treadmills, and more, so your real world effort powers your avatar in the game. Both Jan and Lionel incorporate indoor training on Zwift, both ride and run, for many of their key sessions throughout the year.

For more information, please get in touch with:

END_OF_DOCUMENT_TOKEN_TO_BE_REPLACED 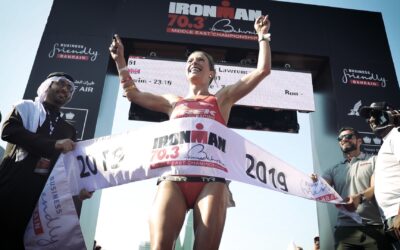 The Bahrain Victorious 13 team have come together in Bahrain for the Ironman 70.3 Middle East Championships as well as the annual team camp.