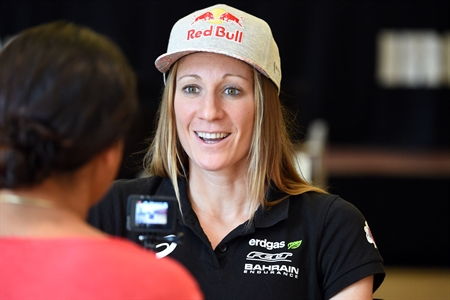 2015 – A year of endurance excellence from Bahrain Endurance Team

Looking back on the 2015 triathlon racing season, the Bahrain Endurance Team has written history and dominated world titles. It has also made its mark on the professional side of the sport, as its success challenges other professional teams and athletes to raise the standard of triathlon performance.

Daniela Ryf has had a perfect season. She became the first woman to defend the Ironman 70.3 World Championship title, then followed that up with the Ironman World Championship title to become the second woman to hold both world titles concurrently. On her way to winning her first Ironman European Championship, she also broke the course record. Ryf is the year’s top-earning professional triathlete male or female: even without the $1-million bonus from winning the Nasser Bin Hamad Triple Crown series, her undefeated streak netted over $294,000 in prize money, edging her over the men’s top earner.

Javier Gomez is the top-earning male professional triathlete this year, a testament to his consistency on the podium and winning when it mattered. He clinched a record fifth ITU world triathlon championship with his overall win at the World Triathlon Series, making him the most successful athlete male or female in ITU history.

On the heels of his 2014 Ironman World Championship victory, Sebastian Kienle has seen improvement not only on the bike, but also on the run and the swim this year. He broke Normann Stadler’s bike record on the Kraichgau course and increased his lead further on the run to win the inaugural Ironman 70.3 Kraichgau. His run put him in front of Gomez at the 70.3 world championship and just behind Frodeno in Frankfurt. An improved swim in Kona put him at the front of the race much sooner than he expected before he ultimately finished in 8th place.

Apart from the world champions on the team’s roster, Bahrain Endurance is also committed to supporting the new generation of elite athletes. Sam Appleton is the youngest member of the team, but has had a stellar year racking up his first Ironman 70.3 title in Busselton, succeeded by wins in Cairns, Vineman, and Austin. He also finished as third-fastest Australian at the Ironman 70.3 World Championship, showing he is one to watch out for across the half distance.

Brent McMahon logged some of the fastest Ironman times this year, going sub-8 hours in Brazil for third place and salvaging a second place just shy of another sub-8 hour finish after a flat tire during his title defense at Ironman Arizona, where he had debuted last year with the fastest Ironman rookie time. The two-time Olympian placed tenth on his Kona debut and is raring to have another go in 2016.

Behind the victories, battles have been waged to recover health and racing mojo. Caroline Steffen overcame illness and personal travails and stayed remarkably consistent to take five wins and two podiums over the half distance, third place in both Ironman Melbourne and Frankfurt, and a 9th place finish in Kona. Jodie Swallow began her year with a bang by winning the Ironman African Championship and automatically booking a spot to Kona. Overtraining forced a mid-year hiatus and change in racing plans, but the swallow is now ready to fly again, ramping up for a bigger 2016 with wins and podiums over the half distance. Luke Bell took a silver at Ironman Australia and racked up enough points to get to Kona, but the focus on the Big Dance took a toll on him. Bell however bookended his year with a big win at Challenge Shepparton.

World championships, podium sweeps, triumph over adversity — these have characterized Bahrain Endurance’s first year. The team was created with a pioneering vision unparalleled in endurance racing. With its stable of all-star athletes including Olympic medalists, world champions, and future stars, the Bahrain Endurance Team will continue to race for key long-distance triathlon titles and promote a culture of health and wellness and endurance sporting excellence across the Gulf region and beyond.