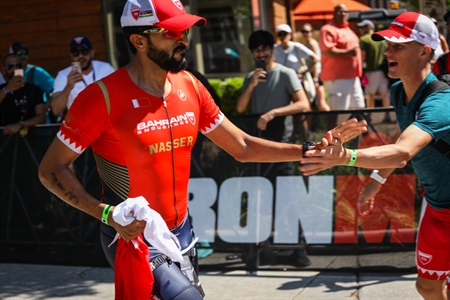 A weekend of personal best performances and results

The Bahrain Endurance 13 team shone across the world with a weekend of personal best performances and great results.

The racing action started with Jan Frodeno defending last year’s Challenge Taiwan win over the half distance. Despite the wet and slippery conditions due to rain, he still managed to go faster than last year. He said, “There’s always a sense of adventure racing here and the passion of the local athletes is contagious.”

Ironman Texas went fast and furious, despite being the longest distance the team raced this weekend. Brent McMahon logged his fifth career sub-eight hour finish, putting him even with Sebastian Kienle with the most number of such finishes. Helped along by his best swim split ever, McMahon rode with the leaders early in the bike before Andrew Starykowicz blew the field apart with a lightning fast bike split. McMahon then ran his way back into sixth place, a solid performance overall in a field where the top 11 men all finished before the clock ticked past the eighth hour. David Plese finished in 12th with a new personal record just slightly off the sub-8 mark.

Team captain His Highness Shaikh Nasser Bin Hamad Al Khalifa also recorded a new personal best in 9:06:33 over the Ironman distance. It was a performance that prompted team CEO Chris McCormack to say, “Mission accomplished. Goal set, arrived ready, delivered when it was asked. That’s the entire principle of racing. Congratulations on the huge PB and perfectly executed race. Next stop: Kona! Great racing to all the team today.”

Ben Kanute then raced WTS Bermuda, characteristically exiting the swim with the leaders and staying in the hunt in the early stages of the bike. Despite finishing down the results board, he soaked up the lessons learned and will put them to good use further into the season. “Time to review and get back to some work. I have a summer full of racing to get ready for,” he said.

Javier Gomez provided the bookend to the team’s solid weekend of racing by winning the Cannes International Triathlon. He finished three minutes ahead of the field with a time of 4:27:12 over the 2-kilometer swim, 107-kilometer cycle (with 1,700 meters of climbing), and 16-kilometer run. He certainly looks to be in great shape tackling the longer distances with his Ironman debut just a month away.