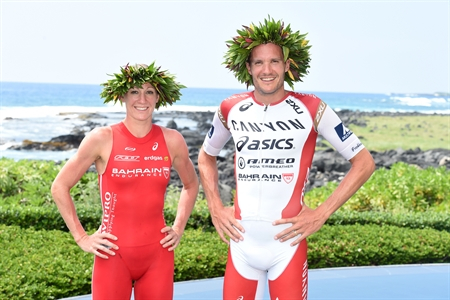 After a year of making history and winning the world’s major triathlon titles, Bahrain Endurance athletes received recognition for their achievements from sports award-giving organizations in their respective countries as well as respected long-standing triathlon publications.

Jan Frodeno became the first triathlete to be awarded Sportsman of the Year at the Sportler des Jahres gala night, beating out ski jumping world champion and overall World Cup winner Severin Freund in a vote conducted among 3,000 of Germany’s sports journalists. His historic feat of winning the Ironman World Championship as well as a gold medal from the Beijing Olympics propelled the votes in his favor.

Daniela Ryf was named Sportswoman of the Year at the Credit Suisse Sports Awards, edging out gymnast Giulia Steingruber in a live television vote during the awards night. Even prior to winning the historic million-dollar prize from the Nasser Bin Hamad Triple Crown series, she had already been named Athlete of the Year at the Swiss Triathlon Awards.

Triathlete Magazine has also named the Bahrain Endurance 13 as Team of the Year, citing the unmatched feat of the dozens of podium finishes and course records achieved by its inaugural roster, as well as its business model unprecedented in the sport of triathlon.

“The awards were great, simply because they move our sport into the forefront of people’s mind,” says Frodeno. “Triathlon is a young sport that’s growing all the time, so to get some mainstream recognition is pretty epic!”

As the new year gets underway, the Bahrain Endurance Team renews its commitment to excellence in endurance sport to promote a culture of health and wellness in the Gulf region and beyond.