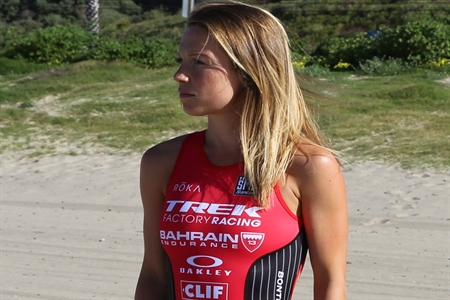 Another stunning performance from Holly Lawrence

Holly Lawrence backed up with a dominating win at Ironman 70.3 Santa Rosa just a week after taking the North American pro championship at St. George. The California-based British athlete has been unbeaten since her win at the Ironman 70.3 world championship on the Sunshine Coast last September and shows no signs of letting up.

While she emerged from the water a few seconds behind the swim leader, Lawrence wasted no time building her lead on the bike course with the fastest split of the day, albeit burning a few matches along the way. She said, “That’s what you get when you feel too good and go berserk on the bike for the first hour: a one-way ticket to Bonks-ville by mile 45 on the bike and spend the next 10 miles trundling in at less than warm-up watts seeing stars.”

Despite slowing down towards the tail end of the bike leg, Lawrence had still built an insurmountable lead. She managed to recover from the energy deficit and finish with a five-minute lead over the rest of the field.

Javier Gomez also made the best of a race week that did not begin ideally at WTS Yokohama. The five-time ITU world champion said, “After a really good training block, things got a bit complicated this week and the body didn’t want to cooperate during the race.” A toothache and fever turned out to be an infected root canal, and the Spaniard was put on antibiotics. He still valiantly started the race and gave his best on the day to finish ninth in the field. “Gave everything I had on the race, which wasn’t much. Time to recover properly now.”