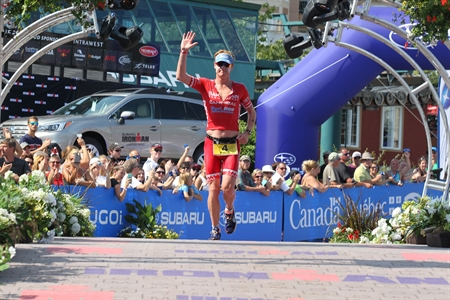 James Cunnama and Paul Ambrose both dug deep on the run to get onto the podium at Embrunman and Ironman Mont Tremblant, respectively.

Cunnama came out of the water in the main group. His steady work over the infamous bike course on the French Alps helped him stay within striking distance of the win as he came onto the marathon only six minutes down from the leader. Unfortunately, Cunnama could not keep his nutrition down, but held together to cross the finish in third — one of only three men able to finish this year’s race in under 10 hours. He takes home a portion of the 70,000 euro total men’s prize purse, known to be one of the biggest in triathlon.

Ambrose was racing for more than just a payday at Mont Tremblant: a spot on the podium would secure his qualification for the Ironman World Championship. His race started well as he exited the water in third and rode himself into second. On the marathon,  Ambrose had to draw on his reserves of mental toughness as the deficit between himself and the race leader grew and he had to battle the other hard-charging men for the last spot on the podium.

“That’s definitely a first for me, running myself back onto the podium,” Ambrose said. “Thanks for all the support. Clawed myself into Kona.” The triumph is sure to boost his confidence leading into Hawaii.