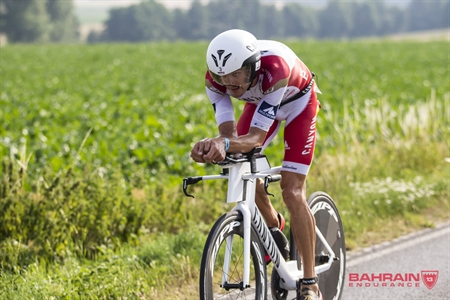 It is the re-match of the year between defending champion Javier Gomez and last year’s runner-up Jan Frodeno. Gomez is on the precipice of history with a fifth ITU World Championship in sight, but is fiercely determined to defend his 70.3 world title from friend and teammate Jan Frodeno, who has been dominating the long distance scene.

Gomez has ruled the ITU rankings this year, staying firmly in the #1 spot. He will be making a bid for another Olympic gold medal next year in Rio. Frodeno, the 2008 Olympic gold medalist, has made a successful transition from short-course to long-course. He placed third in his Kona debut last year and took the Ironman European Champion crown last month in Frankfurt.

Frodeno says, “I’m looking forward to the re-match with Javier. Since Ironman Frankfurt I’ve had a good build-up to Austria, which is another key component to my Kona campaign. This course will reward the best swim-bike-runner. Championship races bring out the best of the best and this one will be no different.”

Gomez knows it will not be easy to defend his title. “I know it is going to be a very hard and demanding race because of the start list. The bike course includes some hilly sections, which I think fits me better than a flat course. I expect it’s going to hurt a lot because everyone will be pushing from the beginning. I hope to have a good day and be able to race for the victory.”

Daniela Ryf is also back to defend her title, having shown mastery over the 70.3 and full distances in the past year. The Kona runner-up and Ironman European Champion is ready for the test. “I do the sport to test myself. I give the same effort in every race I start, whether it’s a world championship or a local race,” she says.

Joining them in their bid to be the best among the world’s best are Sam Appleton, Sebastian Kienle, Terenzo Bozzone, and Jodie Swallow.

Bozzone and Ryf are not just racing for the championship title; as winners of Challenge Dubai, they are in the running for the Nasser Bin Hamad Triple Crown, which will award 1 million dollars should they win the final two races in the series. The 2015 Ironman 70.3 World Championship has been selected as the second race.

Bozzone, who already has one 70.3 world championship under his belt, feels up to the challenge. “This is sure to be one of the toughest feats to accomplish with an absolute stellar field toeing the start line,” he says. “I would have to say the toughest competition on the day I expect will come from my Bahrain Endurance 13 teammates, but with the big money up for grabs and racing for my 6-week-old son back home, I am going to give my everything and maybe it will be enough.”

Kienle has won this world championship twice and is eager to regain the crown. “The 70.3 distance is where some of the best short course athletes and the long course athletes meet to compete. This makes this distance exciting for me,” the 2014 Ironman World Champion says. “I think Zell am See offers a nice, fair course. With the class of the field, I have to be at my very best to have a chance to win my third 70.3 world title.”

Appleton is the new kid on the block, having raced his first Ironman 70.3 world championship only last year. However, with a streak of wins this year where he beat multiple world champions Bozzone and Craig Alexander, the Boy Wonder from Down Under is going into this race with confidence. “I have had a really good lead up to the race training in Boulder, Colorado, and I know I am going to need to step up another level to be competitive,” he says. “I am looking forward to testing myself against the best athletes in the world.”