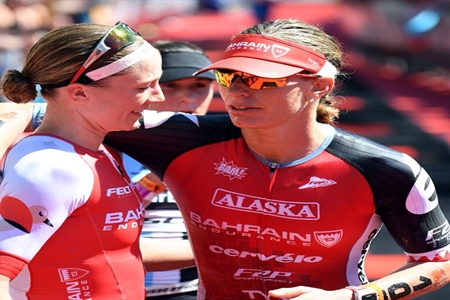 Bahrain laid it out there – Ironman 70.3 World Championships

The Bahrain Endurance 13 team laid it all out at the Ironman 70.3 World Championships this Sunday with finishes in the Top 5.

Daniela Ryf salvaged her day and finished within 33 seconds of the podium in 4th place. “It was a tough day for me today,” she said. “I felt good at the start and I was really confident to have a great race out there. Big respect to these girls, they put on a strong performance.”

The two-time 70.3 world champion exited from the water in the main chase group, but was unable to make headway on the bike leg. “I tried to push, but my legs still hurt a lot today, so I said maybe I’ll wait and maybe they’ll get better in 10K or 20K and I tried again and… It was just a day where it was painful and it didn’t go faster, or let’s say the others were faster so that’s all I could do today.”

She began to feel better once out on the run; her resurgence enabled her to overtake fellow Swiss Caroline Steffen for fourth place. “Towards the end I even thought it was possible to come back to the podium. In the end it was only like 30 or 40 seconds so I was chasing hard, I gave all I had.”

Steffen loved racing in her adopted home turf on the Sunshine Coast. “I really enjoyed it today,” she said. “The swim was sort of a piece of cake, I was cruising, I was so happy with the swim. On the bike I felt pretty strong, too, I mean that course, it has a lot of twists and turns and corners.”

In the same chase group as Ryf, Steffen ran shoulder-to-shoulder with Melissa Hauschildt and Heather Wurtele hunting down eventual champion Holly Lawrence, who had a big lead off the bike. As Hauschildt bounded into second, Steffen battled with Wurtele for the last spot on the podium until the final seven kilometers. “I was hurting in the run at the end. You can’t finish always on the podium. The goal was of course to be top three, and top five is still okay.”

The 70.3 Asia-Pacific champion relied on the crowd support to pull her through to the finish. She said, “I don’t have family here, they’re back in Switzerland but so many friends, everyone was out there, quite amazing. My whole swim squad was out there cheering me on and I never had such amazing support before. Even my dog was out there dressed up in a Swiss cycling jersey.”

On the men’s side, Terenzo Bozzone and Sam Appleton found themselves locked in a similar battle for fourth, while Brent McMahon finished as lucky number 13 after being in the mix and getting onto the run course only 28 seconds back behind first.

Bozzone, the 2008 champion, took pleasure in being able to execute his race despite a hip issue. “I’m really happy with how the race unfolded for me,” he said. “I was right up there out of the swim, felt good on the bike and got on the run and like Ruedi [Wild] there was a little bit of congestion through transition so I lost a few valuable seconds on Sebi [Kienle]  and then couldn’t get my shoe on as well. And then Appo and Reedy came past. It took me a couple of K’s to find my legs and get the turnover going.”

It was a battle of strategic energy expenditure on the rolling run course, fending off blowing up. “Thankfully the pace slowed down because all of us were right on that limit of getting to the finish line fourth, fifth, or sixth or getting passed by everyone behind us. I think that last little hill made or broke everyone’s race today, and for me I was quite lucky,” said the Kiwi.

He gapped Appleton at the top of the hill and broke away. “I just kept going as hard as I could. I swear my technique got horrible at that point, I was that big guy throwing my legs as far forward as I could to get any speed I could down that hill. Appo and I have had some great battles over the years but I think we helped put on a great show today.”

Appleton agreed. “We had a good battle at the end. I’m really, really happy with 5th place.” The Australian who bases himself out of Boulder, Colorado enjoyed his homecoming race. “I’ve got my mum here, she’s probably out there still racing, and my brothers came up and supported me. They’ve never seen me race before so it was pretty special to have those guys up here.”