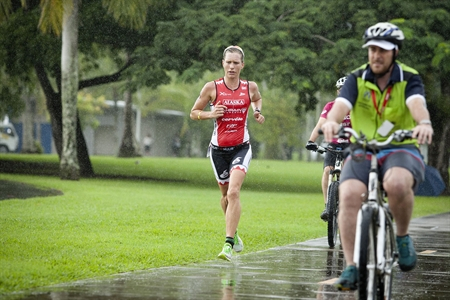 Beyond the Armour of the Warrior Princess, Caroline Steffen

A woman like Caroline Steffen always seems to be in constant motion, whether she’s training at home in Queensland, Australia, or traveling all around the world to race and consistently getting on the podium. We caught up with her between races to see beyond the armor of the Warrior Princess and meet the Princess of Hearts.

Ironman Frankfurt was a hard-fought race with Caroline taking third place behind Daniela Ryf and Julia Gajer. “I wasn’t 100% happy with my race in Frankfurt, which wasn’t a surprise, to be honest. The last few months were a little struggle health-wise, which makes it really tough to race against such a strong field like we had in Frankfurt,” Caroline said. Despite her disappointment, she still finds the positive. “I’m happy to be four out of four times on the podium. Guess not many athletes can show such consistency.”

And what consistency: with the points carried over from her fifth-place finish at the Ironman World Championship last year, her third-place finishes at Ironman Melbourne and Frankfurt, and a slew of 70.3 wins, Caroline will once again be joining the Big Dance in Kona this October.

When she isn’t busy training and racing (which earned her the nickname “Warrior Princess”), Caroline makes time for loved ones. She spent some time with her family in Switzerland after racing Frankfurt and spectating at Challenge Roth.

She has also gotten involved with some initiatives to benefit children. After racing Ironman 70.3 Vietnam, she donated her entire winner’s cheque to the Newborns Vietnam Program. “No mother should get in a situation where their baby has to die just because of missing equipment/machines. In so many countries we take the first aid for our baby after birth for granted. In Vietnam it is not. One day I’ll be a mum and if needed will be thankful for any help I get.”

After Ironman Frankfurt, a young girl approached Caroline and earned a hug from her hero. “She told me how much she loves to watch me racing and how excited she was when I crossed the finish line,” Caroline said. “Wherever I go she is there and follows me racing. It’s nice to see young people like her in our sport.”

Caroline believes it’s important to be a good role model to inspire the next generation. “I did a 5km women’s fun run with a young girl. She never ran 5km before in her life. She was so nervous but was keen to give it a go. Half way through the 5km she started to struggle a little but then she said: ‘If you can run 42km I can do 5km’ … and kept running. Just yesterday she sent me a note saying she started her run training and wants to do more running in future. That message made my day. Love it!”

While Caroline lets her guard down around children and loved ones, she is all business when it comes to her profession. She has already started her 10-week training block, which includes racing at Ironman 70.3 Sunshine Coast and IMG International Beijing before heading to Hawaii for the World Championship. “Tough weeks ahead,” said Caroline.

When the cannon goes off in Kona, the Warrior Princess will once again be ready for battle