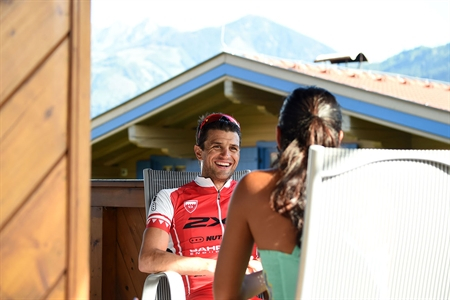 Big guns line up in Dubai for 2016 Triple Crown

Bahrain Endurance athletes converge on the inaugural Ironman 70.3 Dubai this week as the Emirate once again hosts the opening race for the Nasser Bin Hamad Triple Crown.

Daniela Ryf and Terenzo Bozzone both won the first Triple Crown race here last year and have returned to renew the campaign to win the million-dollar bonus for winning all three races in the series. While Bozzone fell out of the running with cramps at the Ironman 70.3 World Championship in Austria, Ryf made good with her wins there and Ironman 70.3 Bahrain.

The Swiss star plans to race Dubai as a way of expressing gratitude to His Highness Shaikh Nasser Bin Hamad for supporting the sport. She says, “I have been back in training for three weeks. Things have gone well, but I have no expectations as the preparation was full with other commitments.”

Ryf has been training at home in snowy Switzerland since she returned from Bahrain. “I did all my training indoors, so I have no idea where I stand,” she reveals. “But I’m looking forward to be part of the race.”

Her compatriot Caroline Steffen will join her on the starting line. She finished second to Ryf in Bahrain and has had the benefit of training in the Australian summer in her adopted home in Queensland. Steffen says, “I’m excited to add the race in Dubai to my calendar this year. It’s early in the season, so we’ll see how my form is but I’m happy to give it a good shot.”

Jan Frodeno missed last year’s first Triple Crown race due to injuries sustained in a bike crash, but he won’t be derailed this year. He says, “I’m excited to squeeze in a race in January, and — let’s be honest — for the chance of a good start to a million bucks!”

The German has been splitting time between trips to Australia, Germany, and a quick visit to his training base in Girona. “An early race is always good to make sure you get out of winter mode, especially after having training come second or maybe tenth in life for a few weeks.”

David Plese is set for his first race as part of the Bahrain Endurance main roster. Eric Watson, who previously was on the racing team and now represents Bahrain is also on the pro start list.