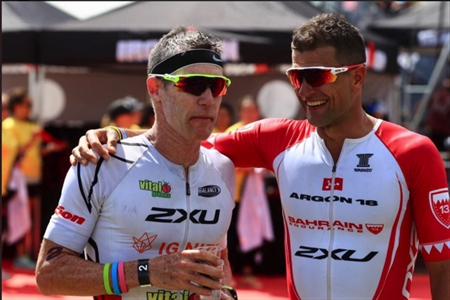 Not only did Terenzo Bozzone claim sweet victory at Ironman New Zealand today, but he also went under eight hours over the full distance for the second time in his career and set a new course record.

With a final time of 7 hours, 59 minutes, and 57 seconds, the Kiwi broke the previous course record by eight minutes and finally broke the “bridesmaid’s curse” on his tenth attempt at the title. He had previously finished second three times and third twice.

Despite coming straight into the Ironman without a lead-in race from the off season, Bozzone showed no signs of rust throughout. He had the fifth-fastest swim over 3.8 kilometers, which landed him in the first chase group at the start of the 180-kilometer bike ride. Some fast riding put him in the lead halfway through, with only Joe Skipper able to hang with him through the back end of the bike. The two athletes started the marathon together, but Bozzone cranked up the pace and was six minutes ahead by the 33rd kilometer. This lead was more than enough for the five-time world champion to cruise through to the win, with Skipper clawing back only 30 seconds to come in second. Cameron Brown, the previous course record holder and 12-time champion at this race, took third.

Bozzone said of Brown, “This legend has inspired and pushed me to be a better athlete at this race for the past 10 years. I can’t believe I am now on the top of the podium.”

The day was ideal for fast racing, with all three podium finishers coming under the previous course record.

Across the seas, racing conditions were far from ideal at WTS Abu Dhabi with numerous crashes on the slippery Formula One bike course due to rain.

Ben Kanute emerged from the water in the top three and rode with the front group, avoiding crashes but ultimately finishing 19th as he ran out of road over the sprint distance to bridge the gap to the race leaders.

Ashleigh Gentle survived a crash to complete the course in 13th place, escaping with only scrapes and bruises. She said, “I’m feeling thankful that I went home with just grazes and an ice pack. Thinking of those who are a lot worse!” The young Australian will be looking to race to her best effort in four weeks’ time at the Commonwealth Games.