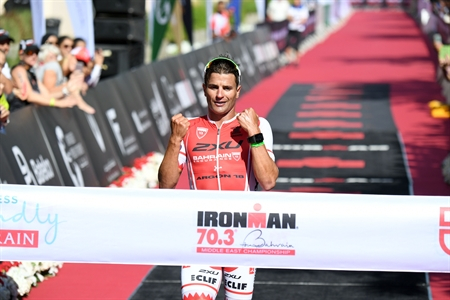 Bozzone, Gomez take on distances across the globe

This weekend Bahrain Endurance will take on distances across the triathlon spectrum as Javier Gomez returns to ITU action and Terenzo Bozzone battles for the Ironman New Zealand crown.

It has been eight months since Gomez raced the World Triathlon Series event in Leeds, where he took fourth place. A month later, he broke his elbow in a freak bike accident and had to bow out of the Olympics. Since then, the Spaniard has bounced back with strong wins in two half distance triathlons: the Rotorua Half Ironman in December and Ironman 70.3 Dubai in January.

While he has been doing more middle-distance racing, going for another Olympics isn’t off the table just yet. “Tokyo 2020 is a decision I will make at the end of 2017, but I still think I can be there racing for medals,” says Gomez. To help him decide, the five-time world champion has a full slate this year. “I will be focusing on ITU races, but I might try to do the Ironman 70.3 World Championship depending on the situation before the Grand Final.”

In his return to the fray of racing draft-legal short-course triathlons, Gomez will face off against current world champion Mario Mola as well as Rio Olympics bronze medalist Henri Schoeman.

“First race of the season is always a bit unknown as not everyone is yet in the best shape,” Gomez says. “My training sessions are going well. I am consistent; let’s see how the others are. The year is long.”

This weekend marks Bozzone’s ninth attempt to take the win at his home race, Ironman New Zealand, which has been won a record number of times by compatriot Cameron Brown. “T” however will be competing with confidence from back-to-back wins late last year including Ironman Western Australia, his first Ironman win ever. It was also his first sub-8 hour finish time, which smashed the course record by 4 minutes.

The Kiwi says, “I am yet to execute the race I now I am capable of here, but I proved to myself at IMWA in December that I could perform over the distance. I love racing in front of a home crowd and I look forward to making it a race that everyone will remember.”