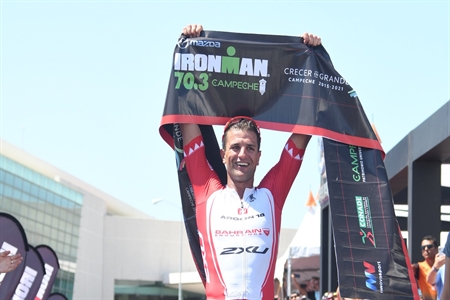 In an unparalleled display of endurance, grit, and sheer talent, Terenzo Bozzone took top honors at Ironman 70.3 Campeche to record his third consecutive win in as many weeks. This makes him the first athlete ever to win three races back-to-back.

The previous two weeks of racing did little to take the shine off his speed.  The Kiwi started his streak at his home race, Ironman New Zealand, winning in course record time, then backing up to win at Ironman 70.3 Bariloche. Incredibly, Bozzone managed to go even faster in Mexico than he did in Argentina last week (3:49:40 in Campeche versus 3:59:57 in Bariloche).

Bozzone emerged out of the water 20 seconds behind the swim leader, but his strong bike legs took him to the front early and kept him there. On the final third of the cycle course, he put on a surge his competitors could not respond to, taking him into the half marathon more than two minutes ahead of his nearest challenger, Michael Weiss. While Weiss was able to claw back a minute of that lead, Bozzone crossed the finish first with plenty of time to celebrate.

“Three’s a charm!” said Bozzone. “So happy to finish off my racing block with a win today. Three races in three weeks — done and dusted and now time to put the feet up.”

Meanwhile, Ashleigh Gentle finished third in the Mixed Relay Invitational on the Gold Coast along with teammates Gillian Backhouse, Ryan Bailie, and Daniel Coleman. With the Commonwealth Games just around the corner next month, Gentle’s preparation is on track for a bid at gold medals in the individual and mixed relay triathlon events.

Ben Hoffman partnered up with Sebastian Kienle as the two-man team Ironman Foundation fielded to the famous Cape Epic mountain bike stage race in South Africa. With a full week of racing ahead of them, the two came in 32nd out of 574 male teams in the prologue and are expecting to race even better as the mountain bike rust comes off.

Looking ahead to the weekend, Brent McMahon will race the inaugural Ironman 70.3 Davao in the Philippines. He has been in Maui putting on the finishing touches to his speed, as the flat course is expected to yield fast times even in the tropical summer heat. “Almost all the work is done, a little more pain and heat tomorrow on the bike then it’s onto the plane Tuesday.”