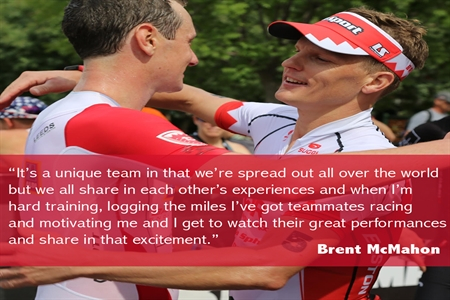 Brent McMahon’s evenly-balanced ability in all three disciplines make him one of the sport’s current super players, with the speed to deliver over the 70.3 distance as well as the ability to race ridiculously fast over the Ironman distance.

As one of the original 13, Brent joined the team with the world’s fastest Ironman debut under his belt and was about to make his Kona debut. That same year, he became the only rookie on the starting line to break the top 10. Since then he has logged four sub-8 Ironman finishes (equaling team manager Chris McCormack’s career record), with one of them the sixth-fastest ever Ironman finish.

“Brent was a very positive influence to bring to the team especially for the younger athletes and for the Bahrain locals who access the training maps of the team year-on-year,” says Macca. “He was brought on to be a consistent player at all races globally. As the oldest member of the team, he brings a reflective and experienced racing view to team camps and planning.