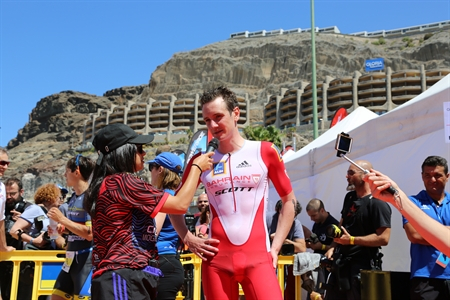 Alistair Brownlee had plenty to celebrate on his birthday weekend as he topped the podium on his first half distance outing at Challenge Mogan Gran Canaria.

The dual Olympic champion emerged from the 1.9-kilometer swim in the lead pack, then steadily built a lead on the multi-lap 90-kilometer bike course. He had a clear five-minute lead as he got onto the half-marathon; by the finish tape that lead had ballooned to eight minutes as he logged a new course record in 4:03:09.

“I think I went okay; I didn’t really know what I was doing,” said Brownlee. “Obviously I knew how far it was and what the course was, but it was the little things like making sure I had the right nutrition and had my bike sorted. Definitely a few things I can improve on but that’s really why I wanted to get out and do this race first. Iron out those wrinkles in my pre-race setup.”

The rolling bike course suited the lad from Yorkshire, who will next test himself at Ironman 70.3 St. George, another race well known for its hills. Getting to the Ironman 70.3 World Championship is atop his goals list this year. “Obviously to do that I need to qualify and the first step for that is doing the race in St. George.”

After her regional championship win at Ironman South Africa despite a back injury, Daniela Ryf seemed unstoppable. But even champions are human, and the two-time Ironman world champion looked to be shaking off some rust still as she finished third in Gran Canaria in 4:38:35 after leading on the bike.

“I jumped off the bike a bit too early because I didn’t really know how many laps to do. A bit stupid of me but tough day. I tried my best and in the end I was struggling quite a bit running out of energy,” said Ryf. “I had a lot going on at home so I couldn’t come earlier. It’s probably a bit too tight but I wanted to use this race as a training day and it definitely was a hard training day. Next time I’ll try to come a bit earlier. I’m still happy I could be here.”

At Ironman Texas, David Plese unleashed a come-from-behind effort to finish 8th. He gave the field a 5-minute lead out of the swim but clawed his way back after a 4:13 bike and 2:51 marathon.

Just like Ryf, Jan Frodeno used the half distance at the Chia Sardinia Triathlon as a race-specific training day and enjoyed himself with a wire-to-wire win.

“This bike course is definitely one of my favorites,” said the dual Ironman world champion and Olympic gold medalist. “Tough but the people were so enthusiastic and with all the athletes cheering you on, it was a beautiful race. I was really hoping to test myself on the bike. I think this course is ideal to go really, really hard by yourself and I’m happy I could do it.”