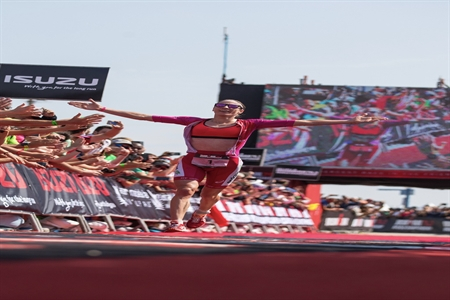 The Swiss faced a formidable challenge from British athlete Lucy Charles, who led her out of the 1.9-kilometer swim by nearly 90 seconds. Ryf was unfazed and made the pass for the lead position a third of the way through the 90-kilometer cycle course, averaging 40 kilometers per hour in some places despite a broken zipper leaving her jersey flapping in the wind. However, Charles stayed in touch and kept the gap down to just two seconds as the two athletes jumped off their bikes.

On the half marathon Ryf opened up the throttle, putting a full minute between herself and Charles by the seventh kilometer. By the time she broke the tape, the gap was nearly four minutes. Anne Haug from Germany took the final spot on the podium.

“So happy to win the 2018 Ironman 70.3 World Championship,” Ryf said. “With such a tough course and strong field, as well as a slight wardrobe malfunction, I was pushed to my very best today. Congrats to all the girls racing today, especially Lucy Charles who is setting the standard for swim / bike and still improving as well as the super fast running Anne Haug. It’s such a pleasure to race in the women’s only field – it really feels special and is great racing.”

The men’s field races tomorrow, with Bahrain Endurance’s Javier Gomez to defend his title against a field including teammates Alistair Brownlee, Jan Frodeno, and Ben Kanute.