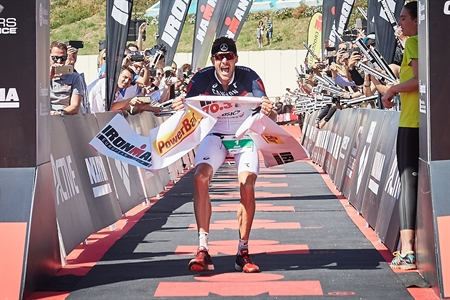 With last Sunday’s win at Ironman 70.3 Barcelona, Jan Frodeno has turned a corner in his training calendar to defend his Ironman World Championship title for a second time. He now has only half a year left until that second Saturday in October.

It has been four years since Frodeno entered the realm of Ironman and three years since he claimed the distinction of being the first man to have won an Olympic gold medal and world championships in Ironman 70.3 and Ironman. He then went on to win in Kona again the following year after setting a new world record time over the full distance at Challenge Roth.

This is, however, the first year he has fixed solely on one goal. He said, “My one and only goal for this year is to nail Kona. That’s not tied to a result, that’s not tied to a specific time. It’s tied to a process of getting there, tied to trying to achieve excellence every day and going there on my very best day.”

It has been quite the process for the German, who reveals that he initially did not have the fire to go for a Kona win after he took gold in the Olympic Games in Beijing. “I kind of said I wanted to be the next world champion, but really I didn’t have the drive… Before I was always saying it was for the old, slow guys. I said I would do Hawaii because as a triathlete you’re supposed to do it once in your life.”

He finished sixth in the world at the London Olympic Games after a long bout with injury, and it took a visit to the Big Island to light that competitive spark anew. “I went there and I was really surprised by the whole energy, the vibe, everything that surrounds this race. And that all of a sudden very much changed my attitude because I had a goal again. I had a vision again, and that paired with being injured for about six months and not knowing would I ever be able to run again sort of added a bit of gratitude and humility to my life and it really made everything a lot easier because I really wanted to be there. Wanted to be good again. I had a dream, I had a goal to go to and now it was all about finding a plan of how to get there and execute.”

Frodeno has executed not just once, but twice. He does admit feeling relieved to defend successfully. He said, “It was one of those reality checks: on the second weekend of October it’s just a little bit harder than anywhere else in the world. I guess that’s why there are so many athletes that do amazing performances all over the world but in Hawaii are never quite able to capitalize on their true form.”

Coming from a flawless day at Challenge Roth where he cracked Andreas Raelert’s old record by six minutes to go 7 hours, 35 minutes, 39 seconds over the full distance, Frodeno said he got to expect he would feel something similar in Kona. He did not. “It was one of those days where obviously my motivation and willpower were there, my mind was rested, but I don’t know where my legs decided to not show up. As a defending champion you want to be up there, you want to be aggressive on the bike — I was just playing defense.”

He still managed to outrun a hard-charging Sebastian Kienle for the win. “It was a very, very tough day, which of course in hindsight then makes it more rewarding but it does put up the question where you went wrong or maybe that’s just what Hawaii is about. It’s the Paris-Roubaix of our sport. You don’t feel good until you finish. Maybe that’s the key.”

Regardless of his earlier accolades, Frodeno is keenly aware that they are overshadowed in popular consciousness by Ironman Hawaii. He said, “Kona and triathlon seem synonymous. I like to say it’s the Wimbledon of our sport. It’s the biggest event and everybody whether or not they do triathlon seems to know Hawaii and the race.”

To take more than one win in Kona elevates an athlete head-and-shoulders above peers. To mount a successful defense puts one on another level: only five men and five women have accomplished the feat. However, Frodeno winning one more consecutive time would have him breathing rarefied air among Mark Allen, Dave Scott, Natascha Badmann, and Chrissie Wellington whose three-in-a-row triumphs have not been equaled since Wellington’s three-peat in 2009.

“Three in a row is special and signifies a truly new era in the sport,” said Bahrain Endurance CEO Chris McCormack, himself a two-time Ironman world champion. “Jan’s got a legacy to make. It is my personal opinion that he will win three Ironman titles in Kona.”

Frodeno’s validation race will be Ironman Austria. He said, “I’ve chosen a race that’s a tiny bit sooner than Roth or Frankfurt in previous years so it gives me a little bit more time to rebuild and everything is just focused on this one day… My whole mindset is on the island already, when I do intervals, when I think of race strategies and all these things. I’m looking forward to the 14th of October.”