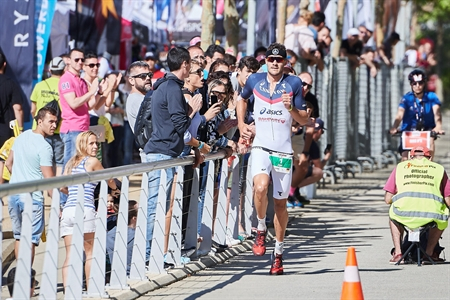 The reigning Ironman world champion is racing Germany’s oldest middle-distance triathlon this weekend. Jan Frodeno will toe the start line at the 35th edition of the Allgäu Triathlon in preparation for his Ironman World Championship title defense in October.

Frodeno joins the ranks of Kona champions who have competed at this race, including fellow Germans Thomas Hellriegel, Normann Stadler, Faris Al Sultan, and Sebastian Kienle.

Meanwhile, Fredrik Croneborg will be flying from Europe back to Asia to mount a title defense at the Ironman 70.3 Bintan. The Swede competed at Embrunman in France on Tuesday, tackling the full-distance triathlon in the French Alps in a time of 10:17:36, finishing 8th. He says, “It will be a real challenge to perform well so close after Embrunman but I would like to try to defend my title from last year and after years of racing on the island it is one of my favourite courses.”

Mikel Calahorra is taking on Ironman Copenhagen. The Bahrain-based Spaniard welcomes the change in scenery and temperature. He says, “The journey to the race has been tough; training in Bahrain in summer for an Ironman is not an easy task.” With five weeks of solid training behind him after Ironman 70.3 Coeur d’Alene, he is looking for a personal best over the full distance. “Now is time to adapt my body to the cold weather, which should be an advantage performance-wise but I’m just hoping it won’t be too cold. Training at 45C and racing at 15-20C is going to be a big change! Train hard, race easy! Training part achieved, now is time to kill the race.”