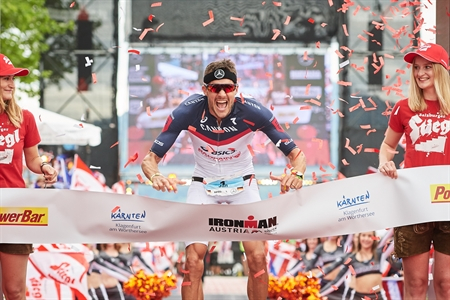 Jan Frodeno took the wire-to-wire win at Ironman Austria on Sunday, setting up his back-to-back defense of the world title in spectacular fashion. The two-time Ironman world champion clocked the only sub eight-hour time at Klagenfurt this year, breaking the tape in 7 hours, 57 minutes, and 20 seconds — fifteen minutes ahead of his nearest rival.

Even though the German had not had the best preparation leading into the full-distance triathlon with illness knocking him onto his heels a month before the race, he still raced head-and-shoulders above the field. Frodeno was first out of the 3.8-kilometer swim leg with a two-minute lead. He grew that gap throughout the challenging 180-kilometer bike course to 10 minutes by the time he hit the marathon, then dug in to increase the lead to 17 minutes at one point. While the chasers clawed back two minutes as they battled for second place, Frodeno had more than enough time to cross the finish line, collapse in relief, then sit and wave at the enthusiastic crowd in thanks. He said, “Only had one tactical card today, go hard on the swim and hope the boys bunch up on the bike and play cat and mouse – I love it when a plan works.”

David Plese had a consistent race, moving up into fourth place on the bike leg and maintaining this until the finish line. Will this finally be enough to ensure he makes the Kona points cutoff for July and secure his start? To this he said, “Inshallah!”

This coming weekend, Daniela Ryf and Terenzo Bozzone are set to compete in the world’s largest and best-loved long-distance triathlon, Challenge Roth. Ryf came within four minutes of breaking Chrissie Wellington’s world record time last year, and though expectations are high she will finally seal the deal this year, the reigning Ironman champion is simply set on doing her best.

She said, “My preparation in the last few months didn’t go as I wanted having to fight a back injury. But fortunately in the past three weeks my training has been going better again and I could make improvements every day. Even if my coach told me not to race I am going to, because I think Challenge Roth is a wonderful race and I don’t want to let my fans down. On race day I will give my best as always and fight for the win with all I have.”