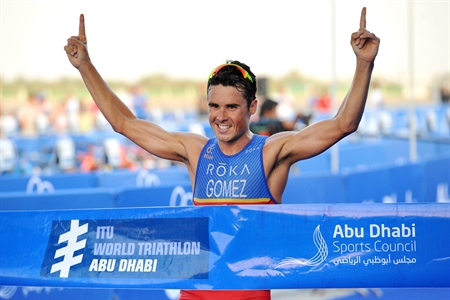 Javier Gomez took his 13th World Triathlon Series career win yesterday in Abu Dhabi, a classy comeback to ITU racing after a broken elbow took him out of contention for the remainder of last year’s series.

“It’s great to come back this way,” said the Spaniard. “I still made a few mistakes in the race, I didn’t swim very well and had a terrible T2, but I knew it was going to be a very tough run, and with Tom [Bishop] it was very tactical.”

The five-time ITU world champion set the fastest overall time on the standard-distance course, making up most of the time on the bike and run legs with eventual second finisher Bishop of Great Britain hot on his heels. Gomez played conservative on the penultimate lap, then pulled away with three kilometers to go.

Gomez said, “He was really strong on the bike, he always is, but he ran very well and I have to congratulate him. He had an amazing run and he made me doubt a little bit. I was trying to save energy for the last lap and luckily I had a little bit extra.”

Bahrain Endurance 13 teammate Terenzo Bozzone finished sixth in a highly competitive field at Ironman New Zealand. The Kiwi swam in the front group and led throughout the bike leg, starting the marathon ahead of the field with a shot at winning on home soil. But it wasn’t meant to be this year, with the dark horse Braden Currie staying close to Bozzone and blazing the marathon to win on his maiden Ironman attempt.

Gomez and Bozzone will next join teammates Brent McMahon and Alistair Brownlee to race the inaugural Super League Triathlon race on Hamilton Island in two weeks’ time from 17-19 March 2017.