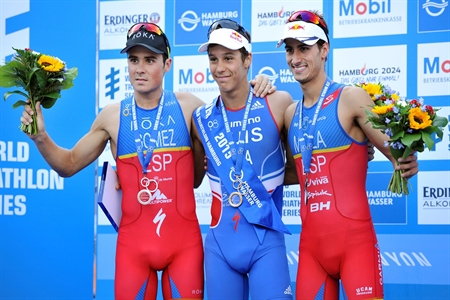 Javier Gomez held tough at WTS Hamburg for second place and retained the world number 1 ranking. It was his fifth podium in the WTS series this year, and sixth time on the podium in Hamburg. The two-horse race over the sprint distance against Vincent Luis of France ended with a sprint through the final stretch. “I gave my best, tried a couple of times, but I wasn’t feeling great and I knew Vincent was really fast in the last 200 meters. I tried to go before at one kilometre to go, but he could keep up and then he smashed me in the end,” Gomez said.

Ben hoffman made his third appearance and recorded his second straight runner-up finish at the Xterra Mountain Championships in Colorado, where offroad specialist Josiah Middaugh extended his winning streak at the race. Hoffman suffered with the best and stayed in the top three all day. He said of the course, “Love/hate relationship with this one. One of the most honest and most painful!”

Joe Gambles had a good strong race at 5150 Zurich to get him on the last step on the podium. He had a good swim with the leaders and rode himself into the lead heading onto the run, but could not shake Pieter Heemeryck of Belgium and Ruedi Wild of Switzerland who went on to finish one and two respectively. “Out of T2 I did not quite have the run speed I needed with the fast pace, but was able to run steady for third,” he said.