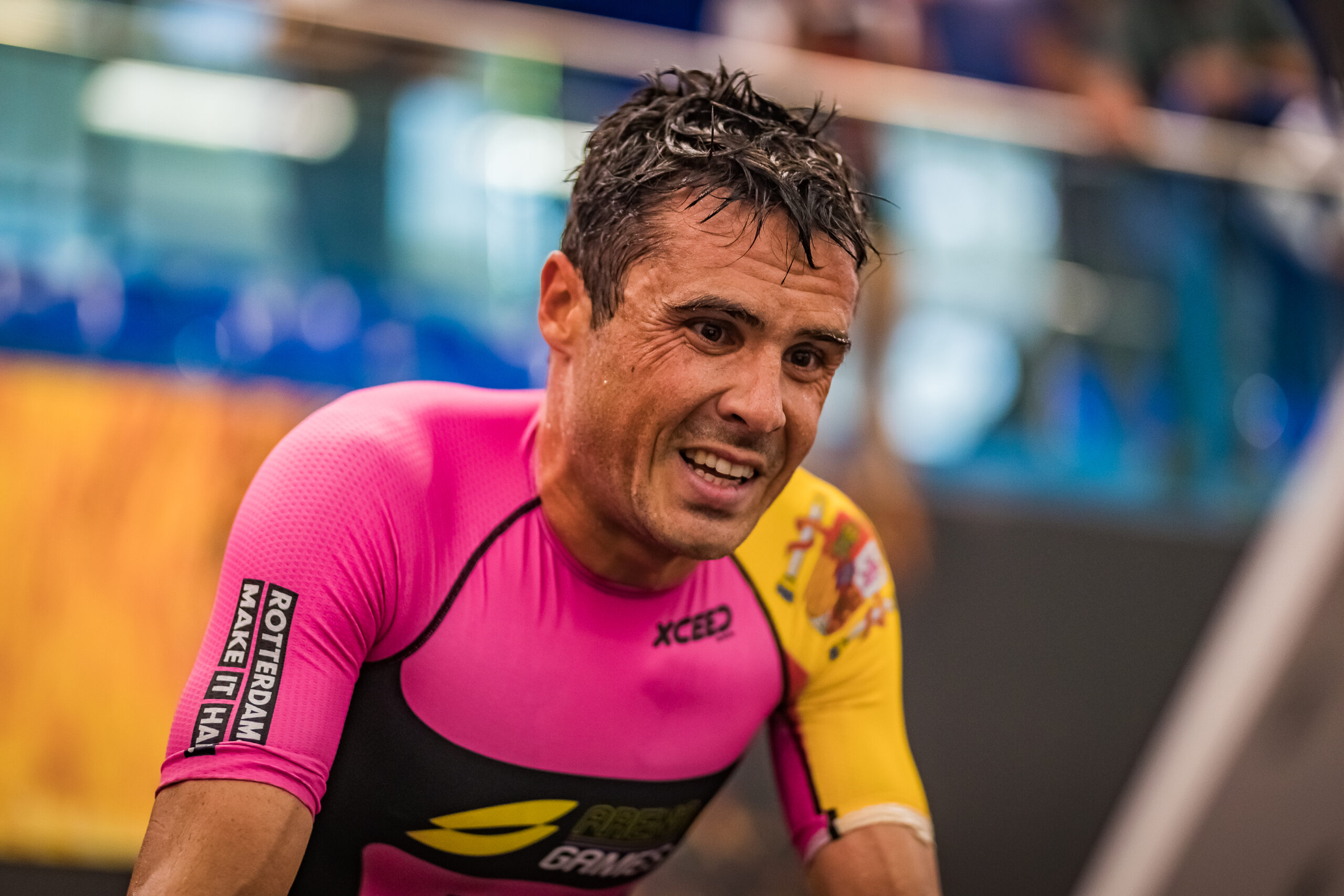 Javier Gomez has marked off his first races of 2020 with strong back-to-back racing in two countries, capping off the weekend with a solid third place overall at the Super League Triathlon Arena Games in Rotterdam.

The innovative race held at Rotterdam’s Zwemcentrum is the first to feature both real-world and virtual racing: the 200-meter swim would be held in an Olympic-size pool, while the 4-kilometer bike leg and 1-kilometer run leg would occur on virtual racing platform Zwift with athletes on smart trainers and self-powered treadmills.

Competing over three rounds of swim-bike-run with the order of disciplines shuffled each time, the five-time world champion needed some time to find his rhythm. He finished 7th of 10 in the first round (swim-bike-run), then 4th in the second round (bike-run-swim). But in the third round (run-swim-bike), he tapped into his massive endurance base and competitive drive to break away from the fatigued pack with Portugal’s Vasco Vilaca. The two drove the pace and were neck-and-neck across the finish line. Vilaca managed to edge the Spaniard for the win by a mere 0.25 seconds.

While he was tied in the overall point standings with Jonas Schomburg of Germany and Jonathan Brownlee of Great Britain, Gomez’s runner-up finish in the final round broke the tiebreak and sealed his bronze medal win.

He said, “I didn’t think I’d make third place overall after a pretty tough start to the day. If you make a small mistake in this type of racing, then you’ll pay for it. I didn’t expect to be on the podium overall, so I’m really pleased. It’s not the favourite distance of an older guy like me but it was really fun as well.”

Only the previous day, Gomez had raced a French Grand Prix in Chateauroux, where his fourth place individual finish helped the Triathlon Club Lievin to a silver club medal. He then took a bus to arrive in Rotterdam the evening before the Arena Games.

Gomez admitted, “The trip to get here was horrendous, with everything going wrong. I slept for four hours and I felt it most in the first triathlon, but I’m proud to have been competitive against some of the best guys at these shorter distances.”

Bahrain Endurance 13 teammate Kristian Blummenfelt had finished two spots ahead in Chateauroux to claim the silver individual medal. He said, “Great to be back racing for Valence Triathlon. Solid swim, first pack on the bike, and good run. I tried to get rid of them on the last mile, but Dorian Coninx was just too fast in the sprint.”

The Bahrain Endurance 13 team will see even more racing action in the weeks to come.