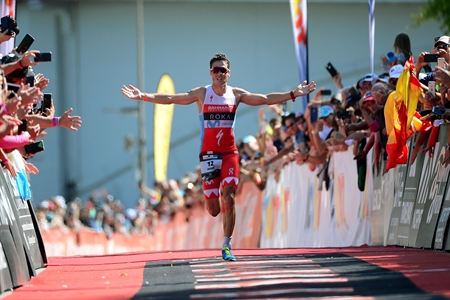 Gomez steps up to Ironman, Ryf steps out for 2018 debut

Three Bahrain Endurance 13 warriors will toe the starting line at the Ironman Asia Pacific Championship this weekend in Cairns, Australia. This has become a hotly anticipated race, with Javier Gomez set to debut on the full Ironman distance.

A five-time ITU triathlon world champion, Olympic silver medalist, and two-time Ironman 70.3 world champion, Gomez is one of the sport’s most talented athletes. His prowess and endurance over the swim, bike, and run will finally be tested to their limits over the full 140.6 miles.

Gomez says, “It’s my first IM, so I don’t really know what to expect. I trained a lot and very hard and I’m confident I can have a good race, but it’s hard to predict. I’ll try to stay focused the whole race and don’t make big mistakes so I can do the best race I’m capable of. I’m looking forward to a new experience and put myself out of the comfort zone, but at the same time that’s what worries me the most!”

Bahrain Endurance’s seasoned Ironman athletes weighed in. Jodie Swallow commented, “He doesn’t need any advice from someone like me, but it would be to race like the Javier Gomez that wants to win a World Championship. Good luck in Ironman Cairns, I’m sure you’ll be absolutely fantastic.”

Ben Hoffman gave some advice that should serve Gomez well in the transition to longer distance. “Ironman racing, on its best days, is an eight-hour undertaking. Patience is your friend. Nothing is decided in the first hour, or even five hours, so keep a level head.”

Brent McMahon said, “Javi, people say they never know what to expect from their first Ironman, so, don’t have any expectations. Just focus on nutrition and working at your pace.” He then added cheekily, “The first one is easier if you just get it done quickly under eight hours.”

Daniela Ryf, who is returning to focused training and racing starting this weekend at Ironman 70.3 Switzerland, offered this sage nugget: “Look at it as a long training day where you get energy and cooling support from aid stations each 30 minutes. Otherwise, I don’t think you need any advice. You are a more experienced athlete than I am!”

Joining Gomez on the starting line are Terenzo Bozzone and David Plese. Bozzone has just finished a three-week training camp in Kona. He says, “After finally winning Ironman New Zealand in March, immediately I couldn’t wait to toe the start line of my next Ironman and see if I could push things a little further and discover more about the Ironman athlete I am slowly becoming. Cairns was a great choice: with it being the Asia Pacific Champs, it is bringing a stellar field which will make sure for an exciting race. To be racing alongside Bahrain Endurance team mate Javier Gomez in his debut Ironman is very special.”

With this race in Australia, Plese has finally raced on all continents. He says, “Left side of the roads is still a bit confusing for me but it’s getting better every day. Other than that, here in Cairns is beautiful. Love the nature, ocean and stunning surroundings. Of course some ‘local’ animals on and off the course. I promised to bring one [stuffed] koala home for my princess. And big chunk of points for the World Championship for me.”

Also racing this weekend are Ben Kanute and Ashleigh Gentle, who are in the United Kingdom for the WTS Mixed Relay Series event in Nottingham and the individual standard distance in Leeds.