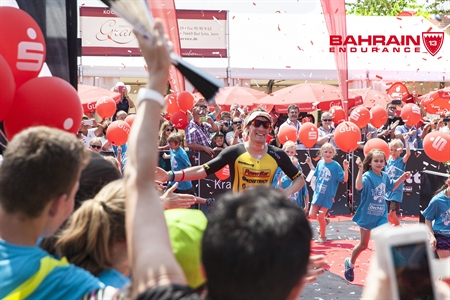 The Bahrain ENDURANCE Team used this weekend’s races to prepare for even bigger ones on the horizon.

With Ironman Cairns on his mind, James Cunnama pushed the pace hard at the Coral Coast 5150 Triathlon. The race organizers canceled the swim 10 minutes before race start due to high winds, but James still dominated the 2.5-kilometer run, 40-kilometer bike, 10-kilometer run format, winning in 1:33:21. “It was an honest race and a good hit-out for next weekend,” he said. “I kept it controlled on the second run after pushing hard for the first one and on the bike.”

Sebastian Kienle took the Ironman 70.3 Kraichgau title and middle-distance German championship in 3:51:56. After surprising his opponents by exiting the non-wetsuit swim in 10th place, Sebi powered to the front in the latter half of the bike leg and broke Normann Stadler’s bike course record by 49 seconds. He increased his lead even further on the run, with a 6-minute cushion between him and the runner-up at the tape.

Daniela Ryf was unchallenged from start to finish defending her title at Ironman 70.3 Switzerland. She broke the tape placed 12th overall among men and women in 4:08:43, working off a comfortable lead from the swim and bike to finish a full 18 minutes ahead of her nearest competitor.

With these confidence-boosting wins in their back pockets, Sebi and Daniela now begin preparations in earnest for next month’s Ironman Frankfurt.

Josh Amberger took the lead in the swim at the Escape from Alcatraz Triathlon, navigating San Francisco Bay’s currents to exit the water a minute ahead of the main pack, looking on-track to improve on his third-place finish here last year. He recorded the fastest bike split and led most of the run, making the other competitors earn their top-three podium spots by overtaking him after the leg-sapping Sand Ladder.

Ben Hoffman finished in seventh with a smile. He says, “Escape from Alcatraz was one of the most memorable racing experiences I have ever had. A true throwback to old school triathlon, this iconic event just gets it right. Even though I didn’t have a perfect day, I was able to really enjoy the venue, embrace the challenge of the course, and share in the history of 35 years of racing over these hallowed grounds. I definitely plan to return and give this one a proper crack next year, and look forward to building off this effort moving ahead.”

Ben and Josh will use their performances at the Escape from Alcatraz Triathlon as tune-ups for their respective races this month. Ben has his sights set on Ironman 70.3 Boulder next weekend, while Josh will have a few more weeks to prepare for the ITU Long Course World Triathlon Championships.