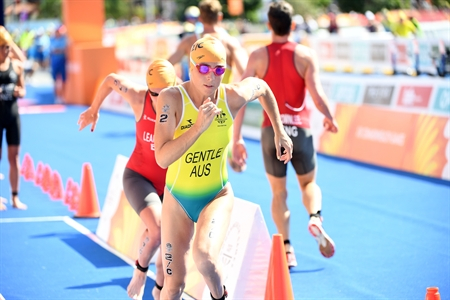 Eyes are on Hamburg this weekend with two major ITU events on the horizon: the Triathlon Mixed Relay World Championships, and the World Triathlon Series elite race over the sprint distance.

Ashleigh Gentle will be looking to improve her podium spot from last year’s silver finish. Disappointed at recording a DNF at WTS Leeds last month due to sickness, Gentle is raring for a shot at redemption.

She says, “I’m really excited to head to Hamburg this week. It’s always an incredible weekend of racing, with huge crowds out supporting the sprint race and the Mixed Relay World Championships. I was second in Hamburg last year, so I’ll be giving it my all to try and get back on the podium.”

Gentle was instrumental in the Australia mixed relay team’s world championship win last year, pushing hard to make up time on the penultimate leg to bring the nation into the running for their first mixed relay world title. As Australia mount their title defense, they will also have to fend off efforts from the United States, which won the 2016 title and were last year’s runner-up with a team that included Bahrain Endurance teammate Ben Kanute.