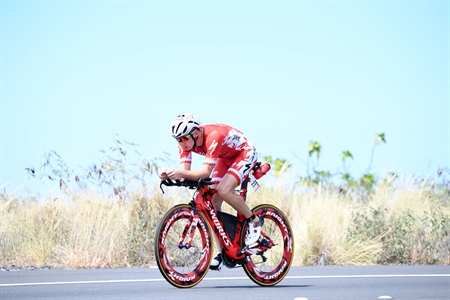 Two Bahrain Endurance 13 athletes will see action over the half distance this weekend. Caroline Steffen returns to Ironman 70.3 Subic Bay in the Philippines to defend her title, and Ben Hoffman seeks to improve on his silver finish at Ironman 70.3 Buenos Aires.

Steffen is a fixture at Ironman 70.3 races in the Philippines, winning all six of her starts including last year’s race at Subic Bay, known as the triathlon capital of the country. With her fellow podium contenders back for more this year, Steffen is girding up for tough competition.

The Swiss says, “Subic Bay is a great race to test the form early in the year. Love racing in the heat and Subic Bay is definitely going to be red-hot racing. As their slogan says: It’s more fun in the Philippines.”

Hoffman narrowly missed the top spot in a sprint finish in Buenos Aires last year, but with the winner absent this year the American has received the race number 1 and the corresponding target on his back.

“The course is flat and fast, and there is a strong field in attendance so no doubt I will have to push myself to the limit all day,” he says. “I’ve been hard at work towards my early season goal of defending the title at Ironman South Africa, and this race slots in well as a test of my fitness and hard day of training before April 2nd.”