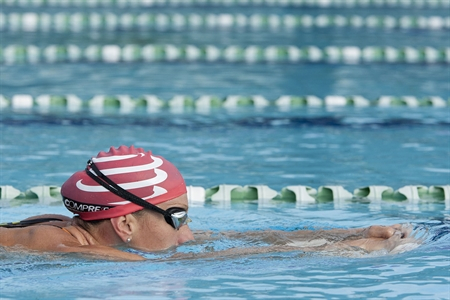 How to improve your triathlon swim

One of my best triathlon swims was at Ironman Canada in 2009.  I swam 53.27 for 3800 meters. It was the 4th fastest women’s time, and 38th fastest overall and it demonstrated a marked improvement in my swimming because, when it comes to swimming, I was not a natural.

At the time, I reflected on where I came from when I started my triathlon journey and my progress in the pool, lake and open ocean. Then, and now, I attribute my increased speed (in 2005, I swam 1.01.23 at the same race) to two factors:

1. Having the patience to learn proper technique.

During my early years as a triathlete, I had a coach who worked hard on technical changes and it took three years before I made significant and permanent changes to my swim technique. For three years my coach tried every trick in the book to effect change in my stroke. I can remember swimming endless hours with a band tied around my ankles, or weights attached to my wrists, or various contraptions strapped around my hips. I remember one day in Spain when my eternally patient coach took a saw to a plastic crate in order to make hand paddles in exactly the right shape that he felt I required.

Then one fall day in 2004 we spent four to five hours together, just him and I, on swimming. In those days, our video equipment was anything but state-of-the art. His little handheld camera had a waterproof case and he held the contraption just below surface level as I swam. Then I got out of the pool, and we went into the next room to watch the footage on an old-fashioned VCR. After that, I would jump back in the water, try some changes (that invariably felt awkward and weird), video again and repeat the process. By the end of the day I was a prune, but I still consider that to be the day that I learned to swim properly.

The following spring, I started racing consistently with the main group of professional women. My swim was no longer a weakness.

Gone are the days when the swim is not important in triathlon. So, in 2008, I increased my swim volume and intensity. That year I swam 25 km a week and swam hard more often than not. When I used to train with Ironman World Champion Faris Al Sultan, he told me “you need to swim harder” and I finally took this advice. My coach put together a great swim program and I followed it to the letter.

The other thing I changed is that I started swimming with a group. With a handful of swimmers in the pool who were faster than me, and another handful who are about the same, I was in good company and I was pushed out of my comfort zone.

This final change really put the meat on the bones of the swim stroke that my old coach and I perfected together those years ago. No amount of technique work can replace hard work and a smart training program.

If I have advice for others wanting to improve their triathlon swim times it would be this: Be patient with yourself when it comes to swimming. Technique may not change overnight. It may take years, and it will feel awkward and you will wonder if anything is really changing at all. Work hard consistently and have faith in the process, and like most things, the changes will come.

There are some great swimming events popping up in Bahrain that can help everyone improve their confidence in the open water. Check out Boost Bahrain on Facebook for the latest events.