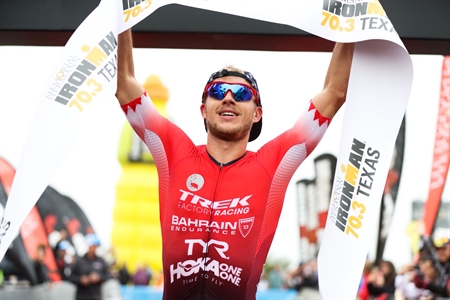 Ben Kanute really ‘put the cat among the pigeons’ last year at Ironman 70.3 Worlds in Chattanooga when he led out the swim alongside Javier Gomez. Often ITU stars struggle strength-wise in non-drafting format races but Kanute is a different kind of short course athlete; bigger, stronger, abundantly brave. A known race-changer in ITU bike packs, in Tennessee last year Kanute matched the pace of Sebastian Kienle on the bike (except 4 mins ahead of him on the road) and held strong on the run. That afternoon Kanute stood on his first World Championship podium sandwiched between two greats of triathlon – Javier Gomez and Tim Don. World silver. We all took notice.

There have been multiple wins in shorter non-drafting races; Escape from Alcatraz, NYC triathlon and Boston Tri, and participation in the new US-based short course format Major League Tri as well as in the Super League series. World Triathlon Series and USA Team relay racing still remain a priority for Kanute whilst his Ironman 70.3 participation is reserved only for ‘special occasions’.

South Africa is a long way from America and Kanute must negotiate the travel well in order to upset the odds amongst the likes of Gomez and Frodeno who have been solidly concentrating on long distance racing for some time.

We do know that Kanute carries speed into September and may take advantage of the tired training legs of Ironman athletes with Kona playing on their minds. Kanute will attack on the swim and leave it up to the other contenders to chase him down. He will hope for torrid waters and strong winds; PE has delivered both on more than a few occasions.