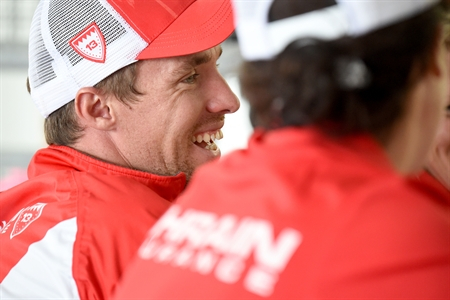 James Cunnama made a smashing debut in offroad triathlon on Saturday, securing second place at Xterra Grabouw. Only defending men’s champion Bradley Weiss was able to overcome the Ironman specialist.

Cunnama was first out of the 1.5-kilometer swim and proceeded onto the bike course in the lead pack composed of fellow South Africans Weiss and Michael Lord. He came as close as 1:22 behind Weiss, but the defending champion pulled a clear 2:47 ahead by the end of the 28-kilometer technical mountain bike course. Lord gained a slight edge over Cunnama out of transition, but faded on the 12.5-kilometer running trail while Cunnama had the day’s fastest run split to clinch the second spot on the podium. Aiden Dunster of New Zealand rounded out the podium.

Post-race after the finish line, Cunnama quipped, “A bit of a higher heart rate than I’m used to, but I guess we’ll take it as some good Ironman training. A little bit rougher than I’m used to, too, but it was fun.”

Cunnama is building up to the Ironman South African Championship in April, where his partner Jodie Swallow is the defending women’s champion. Fellow Bahrain Endurance teammates are also set to confirm their attendance in the next month.