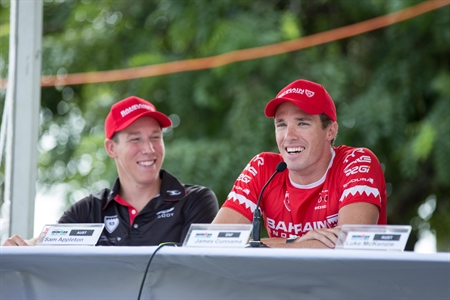 We caught up with James Cunnama training in Phuket, Thailand a week after his win at Ironman 70.3 Vietnam. We picked his brain about racing and training — check out his advice to age groupers on how to sustain interest in triathlon!

You’re currently at Thanyapura doing a block of work.
Yeah, two and a half more weeks before I go to Ironman Cairns.

You’ve had good performances so far this year, the latest being the triumph at Vietnam 70.3. How was that race?

Well, as everyone will tell you, it was hot. That’s the defining thing about that race, it was hot hot hot. Felt like about 45 degrees on the run but yeah went well for me. I kind of did my own thing, got out of the water and Tim Reed rode away from me and up to the lead group and I just didn’t have the power to go and catch those guys. So I decided there and then that I was just going to ride my own race which I did and got off the bike only 90 seconds down on the group of five guys and was able to pick them all off on the run. It was perfect, you know… I’m very happy with my run, at the moment it’s going really well. I saw that on race day there, I was able to run comfortably past everybody and actually get more of a lead than I needed, but it was a good test for me going into Cairns and going into the rest of the season.

Did you do anything in particular to get ready for Vietnam?
I did 70.3 Busselton the weekend before, which was not good preparation for that because it was three degrees on the bike, it was absolutely freezing and then I came over here to Thanyapura but was only here for three days so didn’t get much heat acclimatization or anything like that. No, I didn’t do anything specific, I am from South Africa and from a hot environment, I handle the heat pretty well even though I’m one of the bigger athletes. The heat’s never really been a problem for me so I kind of adapted really well. It does mean you have to change your tactics, you have to back off a little bit, you have to control yourself a bit better, make sure you get in the food and that kind of thing but I’ve raced in the heat enough now to know those kinds of lessons.

Last year’s Ironman Cairns was cold and rainy. What do you think the chances of that happening again are, and how well do you think you will deal?
They told me last year was freak weather that’s very unusual for that time of year for that area, that it’s normally around 28 degrees. That would suit me perfectly. I’m hoping for a sunny warm day. I think, you know, the hotter the better for me. Having said that, I’ve raced in cold and I don’t really mind it. I don’t think it’ll be that cold, not like Busselton where it was three degrees. I think even if it’s cold it’ll be fifteen, sixteen degrees and that’s fine for me. At the end of the day it’s going to come down to who’s fittest… everyone’s got the same weather conditions, so as long as I’m fit and ready… And so far the training’s going really well.

Cairns, and then Kona?
That really depends on points. This year I’m behind the eight ball so to speak as far as points go. I had a DNF in Kona and because I was focusing on Kona I didn’t do any other races in the late season last year so I didn’t have any points going into this year. I was way behind, Ironman South Africa didn’t go as well as I hoped it would, I only got 10th there so I didn’t get too many points, and then Busselton and Vietnam are the only points I’ve got so far. So if I win Cairns, I’ll be on the bubble and then I’ll probably have to do another race to make sure I one hundred percent secure my spot. We’ll see how Cairns goes and how the points go.

I’m doing more racing this year. Last year I did less racing, trying to focus on Kona, and I much prefer to race often and use the races to prepare myself for the big races. It’s hard to focus on one race; racing is the best training, essentially, as long as you can do the races and recover from the races, you’re gonna be fitter for the next race. It’s just finding that balance and not racing so much that you can’t recover, but racing enough that you’re in peak form for the big races.

What do you and (your partner and fellow pro triathlete) Jodie Swallow do away from triathlon?
Jodie and I don’t get a lot of time where we don’t do anything not related to triathlon, unfortunately! Our lives really do revolve around it. But Jodie and I, we click really well as far as our lifestyles go. When you’re training as hard as we are and doing as much work as we are, you come home and just really want to collapse on the couch and watch Netflix or whatever the case may be.

For a lot of relationships I think, even with age groupers, it’s very difficult for the other partner in the relationship who’s not doing the hard training to understand that situation, to understand that putting your feet up and doing nothing between sessions is as important as doing the sessions themselves. So as far as that goes, we’re not afraid to just sit at home and do nothing. We spend most nights at home watching TV; we don’t feel the need, there’s no pressure to have to go out and do stuff and have to party, to have to go to clubs, to have to go see friends all the time. We’ve got each other, and we do what we need to do to perform well.

Obviously that’s got to be balanced with some letting your hair down and socializing and going out and seeing places where you are and we do try, we’re not as good at that as we should be, switching off when we’re not training, we’re both kind of focused a hundred percent, it is difficult to switch off, but we’re better when we’re together, I think, and that’s rare. A lot of people get distracted… Jodie and I are better when we’re together, we both help each other, we both balance each other as far as motivation as well as relaxation.

What is one bit of advice you can give to age groupers?
So much to choose from! How do I narrow that down? I guess the one thing I always go back to is, and I’ve been saying this for years… When I first started triathlon, I have a degree in sports science and I started coaching at the same time I started doing triathlon. I slowly became more pro and [did] less coaching because I didn’t have time for coaching, but that would bring me to my main point as far as age group triathlons go. Get a coach. There’s so much information out there, there’s so much advice and wisdom, and you can read all the magazines, if you go on Slowtwitch and you see all the articles and all the experts and all the opinions, it can be very overwhelming very quickly.

Ideally you’d have something like a Thanyapura situation where you have a squad that you can just go out and train with, and if you’re having a good day you can push the pace and if you’re having a bad day you can sit off the back and do your own thing. That’s ideal, it’s not always available, but even if that’s not available, if you can have a coach who can just tell you, “Today you’re doing this.” No thinking, you get out, you do it. If it hurts, you go slowly, if it doesn’t hurt, you go faster basically, but you get what your coach said. That takes all the pressure off and you can still enjoy it.

And I think a lot of you, it takes a year or so and then they start losing their enjoyment because they start focusing too much on what they should be doing or shouldn’t be doing and whether they’re doing the right thing and their goal. They put too much pressure on themselves and it all becomes a little unbalanced. When you get a coach, you can keep the balance and you can keep the enjoyment for a lot longer, and if you keep the enjoyment, the results will come. I think for age groupers, non-elites, it is absolutely vital… if you’re gonna drag yourself out of bed every morning, even for an age grouper it’s a lot of work swimming and biking and running and trying to get them all ready for the distances of 70.3 or Ironman. If you have to force yourself to do it, you won’t last very long. It’s too difficult.

The process has to be fun and enjoyable, not just the outcome at the end of the day. You know, it’s too much work and too long, too many long hours to just put off the enjoyment until race day and get all the reward on race day. Don’t get me wrong, race day is very rewarding, but there’s just too much time before that that you won’t enjoy for you to do it again the next time. So you need to find your group, you need to find friends, you need to do it in fun places where you can explore and see new roads, see new places.

I like that when we travel I get to see all different countries around the world, and generally I get to see them by bike. I see the roads and I see a different side to the tourist aspect because you don’t go to the big cities. You go to out-of-the-way places where they have races, but you see it by bike and that’s part of the enjoyment. You’re getting your training in but you’re seeing new places.