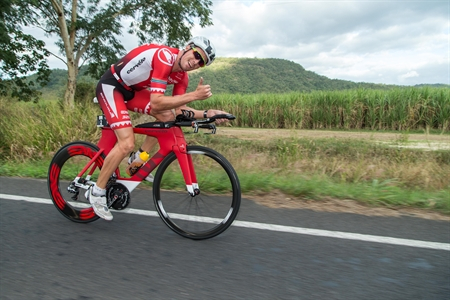 In Part 2 of James Cunnama Unplugged we chat with him about the coaching relationship with Chris McCormack, being part of the Bahrain ENDURANCE 13 team and the way of the future for triathlon.

James Cunnama has been training in Phuket, Thailand in preparation for this weekend’s Ironman Cairns under the guidance of his coach, Chris McCormack. McCormack is also the director of the Bahrain Endurance 13.

When did Chris McCormack take on the role of coach?
He’s been helping me since the middle of last year. It wasn’t so much a coaching relationship, more of a mentor, guidance, just making the right decisions as far as where to race or how often to race and you know just with the major decisions and keeping an eye on what I’m doing, making sure I’m not going too hard or too long, you know, overcooking it, making sure I’m getting the right sessions in. It was more of a guidance thing, a mental thing, just an objective opinion of what I’m doing.

And it’s really grown into more of a coaching relationship. He is a bit more hands-on now with my training, what I do day-to-day. Coming out to Thanyapura, the main reason for that was to have some one-on-one time with Macca, pick his brain a little bit about my season, pick his brain a little bit about my training, what I need to do to win the big races, to win Kona. You know, he’s been there, he’s done that, so if I can learn from the guys that have done it before, then it’s the best way.

What has he brought to the table physically, mentally, on and off the race course?
We’re still working that out, I guess. He definitely, like I said he’s got the experience. He gets it, he gets when I’m struggling or when I’m tired, when I’m doubting, you know that mental side of training where you’re doubting, “Have I done too much, have I done too little? Am I too tired, am I not tired enough?” Having someone who’s been there and done that to just say, “You know, you’re up where you need to be, just focus on this race or that race, focus on the next session” or “Have a rest, you deserve a rest” whatever it might be, having someone like that around is invaluable.

It’s very difficult to do this on your own, it’s very difficult to be objective when you’re exhausted from hard training, all you wanna do is quit or all you wanna do is stop, or you wanna push harder because you’re so desperate to win when you need to slow down, all of those things are already negative and they can really derail your season, so having an objective opinion is invaluable. I think that’s probably the main thing he’s brought to the table.

He does also bring a lot of experience as far as the mental game, as far as getting my head in the right space for race day, with big races particularly. It’s not always just a case of being physically ready and lining up on race day. You have to be ready to actually race. Even if you’re super fit, even if you’re at your absolute peak, ironman still hurts — a lot. And even if you can be really really fit, if you haven’t mentally prepared to go to that deep dark horrible place, you’re still not gonna win. You have to be prepared to hurt, you have to get yourself into that mental headspace and being able to find that in your mind on the day when you need it and not just hope that is there is a skill that you have to learn.

The camaraderie and support all the members of the Bahrain Endurance 13 Team have shown in the last few weeks is something you don’t see every day in the sport.

At the end of the day, triathlon is an individual sport and we’re all out there to win, but at the same time there’s a lot of camaraderie in professional triathlon. We’re all friends. I’m thinking about Vietnam, and Vietnam is a pretty cool place to hang out with just the pros over there. We’re all mates, we have dinner every day, breakfast together, we had lunch together, dinner together leading up to the race and after the race. And then on race day we go head to head trying to smash each other. It’s kind of just the way of professional triathlon.

It’s a pretty good group. There’s always rivalries that are more deep, but I think for the most case, people are out there supporting each other. When you’ve got a common interest, you know, the way the team is structured, the way the bonuses are structured, we are kind of all in it together. Everyone’s success is a shared success in Bahrain Endurance 13. We all support each other. It costs nothing but it means a lot to give a few tweets, a shout out for your teammates, and to see them succeeding… when you see them succeed we all succeed. The team does better, the next year the budget’s bigger, next year a more sponsors are on board, it all works well together. It’s a fun part of the team seeing all the top guys supporting each other.

At Vietnam I ran past Terenzo a few K’s into the run, and his first words were not very polite, I won’t repeat them here. They were fairly rude as only a Kiwi can do, but he immediately followed that up with, “Go get him, James, go get him,” meaning I should go catch Tim Reed who was up the road still. So it was a bit of that balance of being disappointed he was getting beaten but at the same time supporting me and saying, you know, if I can’t win this, a Bahrain Endurance 13 guy needs to win this. And that pretty much sums it up.

It’s absolutely nothing to do with looking for what we had with Team TBB and Brett Sutton, that was something completely different.

I think for the most part it’s a good sponsor, good support in a sport where getting good financial support and getting the kind of support where you can focus only on racing and winning and not have to worry about all the logistics and all that kind of stuff is very rare. So when that opportunity came along, Bahrain Endurance 13, it’s obviously a very valuable thing for Jodie and myself. Now that everything’s taken care of for the year, we can now focus 100 percent on doing well in the big races, doing well in Kona. That was obviously the main reason why we chose to be on the team.

Obviously, having the team as established and significant as far as worldwide exposure goes, as we win races and get exposure for the team, the team itself gets exposure for us. So it’s a win-win relationship as far as our careers go.

Brett Sutton’s Team TBB was a very different kettle of fish. It was more of an army bootcamp team thing where, you know, it was us against the world and we were taken off into far-flung places like Krabi around the corner from Thanyapura where we did hard bootcamps and were cut off from the rest of the world. We all trained together, we all smashed each other with the idea that everyone would come out of it stronger. But it wasn’t necessarily taking care of the financial aspect as well; you were given a salary, maybe not as significant as Bahrain Endurance, and you just had to make it work. You were essentially there in Team TBB for Brett Sutton’s coaching more than anything else, and you took all the good with the bad. At the end of the day, most people got the results because of Brett Sutton’s coaching, but it wasn’t necessarily the kind of professional support that we’re now getting from Bahrain Endurance 13.

In triathlon, there’s more of a culture of, “Well, we don’t get our value from you racing, we get our value from you tweeting and blogging” and that kind of stuff and it needs to change. There is place for social media and it does add value to your sponsors, but it should just be a cherry on top, it should be just an added bonus. The real exposure should be in racing, what we do best which is swimming, biking, running better than anyone else in the world.

The race coverage in the past has been bad, yeah abysmal is a good word, but it’s improving you know. Challenge Bahrain last year had really good coverage, live streaming around the world, the WTC coverage they’re trying, they’re getting there I suppose they’re making improvements although it’s very slow and tedious to me, I think they could improve it a lot more still, but yeah it’s coming. And as that comes, the exposure for sponsors comes, and it frees us as athletes up to do even more of what we do best.

This is the way the sport is gonna go. It’s never gonna be quite like cycling where it’s a team sport, but it’s very difficult to get individual sponsors as an athlete. Most major corporations have a policy, they don’t sponsor individuals, it’s too much risk and not enough reward to sponsor one individual. So they will only sponsor a team where their risk is spread out over the whole team and their reward is also spread out. They’re kind of hedging their bets that someone’s going to be successful on the team and they’re going to get some exposure from it. And I think because of that, the sport has to go that way.

You have to have teams where you have a group of 10 or 12 athletes, or 13 as the case may be, athletes who are all going for wins, all going for big races, but a sponsor can get behind the whole team because they know that at least a few of those people are gonna do well. I think it’s gonna happen more and more and I think as the teams get more professional, they have better management and better sponsors and bigger budgets, you’ll see the performance of the athletes increasing too. The whole sport will just go to the next level and I think that’s exciting to see.