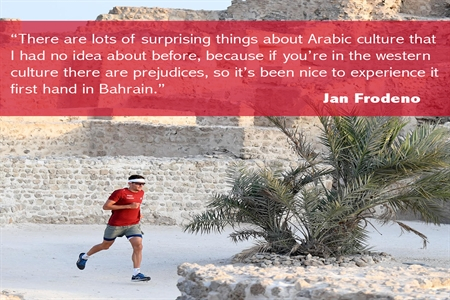 What can be said about Jan Frodeno that has not been said before? The Olympic champion from 2008 came to the Bahrain Endurance 13 team as a leader and the focused athlete to win World Championships for the team in Ironman. His domination and professionalism as an athlete, alongside that of Daniela Ryf, have shaped the culture of the team from the beginning.

Upon signing Jan in 2015, Chris McCormack said: “Like it or not, this is the new era for Ironman racing. Jan Frodeno in my opinion will go on to be one of the greatest, if not the greatest, Ironman racer we have ever seen. He has a work ethic like I have never seen, and a professionalism and focus that is needed to succeed at the world’s biggest events. He is a major signing for the team and we expect a World Championship medal haul to come off the back of him. You rarely see an athlete up close like this with so much talent. I am excited to see what the next few years brings with Jan.”

Jan’s impact on the team was immediate. He was Bahrain Endurance 13’s first ever world champion when he won the Ironman 70.3 World Championships in Austria in 2015. Bahrain Endurance 13 clean-swept the male podium that day, and Daniela went on to dominate the female race in what to this day was one of our teams’ greatest ever performances. Jan’s 2015 season was one of the best on record, shutting down all naysayers with his triumph at the Ironman World Championship.

After becoming the fastest athlete ever over the ironman distance with his Challenge Roth performance in 2016, he defended his title in Kona, a notoriously difficult feat. Based in Girona Spain and Noosa, Australia, Jan brings a calmness and character to the team that is enduring and infectious. With an almost obsessive desire to win, he has been a key catalyst in working closely with team members to bring out the competitive best in all of them.