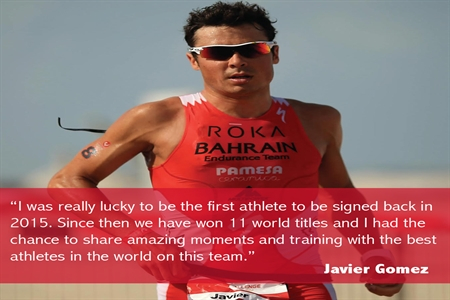 Javier Gomez of Spain is considered by many one of the greatest triathletes to ever compete in the sport. He was brought to the team with a focus on Olympic Games success and for the very reason he had such an incredible range, he was able to deliver Ironman 70.3 success at the highest level as an added bonus.

Now with eight world titles to his name (two of which he won while on the team), Javier first burst onto the scene in 2003 when he captured the U23 world title with a devastating swim-run combination that had him identified as a game changer. An Olympic silver medalist, he has dominated the sport since 2005 and has been considered the key disrupter to the way triathlon was raced in the modern era. One of the sport’s most popular champions, Javier was Bahrain Endurance 13’s first signed athlete and the first athlete to race in the team colors. He announced to the world the Bahrain Endurance 13 vision.

In an almost flawless 2015, Javier was a key catalyst shaping the Bahrain Endurance team culture built on aspiration and success. He won an unprecedented fifth ITU world title and set up what was considered the race of the decade in the anticipated face-off with the Brownlee brothers at the Rio Olympic Games the following year. A bicycle crash and a broken arm ended his Rio Olympic aspirations one month prior to the Games and robbed the world of seeing what would have been one of the sport’s greatest showdowns.

In 2017, Javier returned to the racing scene with a new vibrance and a new commitment to focus on winning the world’s biggest titles. He announced to the team early he wanted to focus specifically on Ironman 70.3 success and captured his second world title over the distance in a race many consider one of his best performances.

With Javier as one of the team’s key strategic racers and influencers, we are all excited about 2018 and the story of greatness he continues to write with every splash, pedal stroke, and stride.