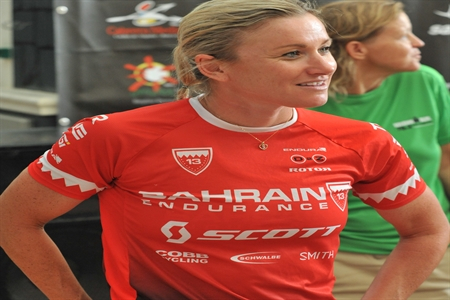 Elite athletes often tread a razor’s edge between fitness and illness. While they have each in turn racked up solid wins over this year, both Jodie Swallow and Caroline Steffen have also faced some health challenges that led to what they consider disappointing performances. Yet throughout this up-and-down year, neither have lost belief in themselves as world championship contenders.

With this year’s Big Dance just on the horizon, Jodie and Caroline are both finishing their preparations on-site in Kona.

Jodie has flown in off a win at Ironman 70.3 Lanzarote where she led all day on all three legs, showing how far she has come from a period of overtraining after winning the Ironman South African Championship early this year. She also needed to take some downtime after a pre-race crash in Austria hampered her ability to race the 70.3 World Championship.

She says, “I am incredibly motivated to fulfill my potential in triathlon — so much so it can become a liability. Positivity, motivation, and vision are all great attributes in this sport, but realism is also an important factor and I was tired. Really, really tired.” After assessing her options, she left Boulder, Colorado and her coach Siri Lindley to join partner James Cunnama in Girona, Spain.

Jodie reveals, “I joined James in Europe in order to recover and rest and it took me a good few months to start to feel even remotely human again. I was ill and worried and had a lot to consider. I had to make changes quickly if I were to recover and excel again by World Champs.”

Caroline has won all her races over the half-ironman distance this year and been on the podium at both her Ironmans in Melbourne and Frankfurt. However, her prep work has been interrupted by colds and infections, and her Kona block start was delayed by a week to allow her to recover from a bike crash at Ironman 70.3 Philippines. She says, “To be honest this year was a bit of a struggle for me. Missed out on lots of weeks training but always able to back up nicely and get myself ready to show a strong performance in 70.3 races. However, for Ironman I just wasn’t strong enough. At Melbourne and Frankfurt I wasn’t able to race for the very top spot but able to show a smart controlled performance which saved me a spot on the podium. I learned to race with what you got and get the best out of the situation.”

Caroline approaches Kona preparation a little differently every year. She reveals, “One year I travelled from Europe straight to Kona, the year after via Mexico, USA, or China. My Kona preparation was always different, but the pre-race week always stays the exactly same. To me there is no difference between Melbourne, Frankfurt, or Kona.”

Both women have fought through the kind of year they’ve had to get to Kona healthy. Jodie says, “I expect it will be insanely hard – it always is. But then I also expect to be able to respond better than I ever have before to the challenges an Ironman in Kona presents. I’ll have to ensure my head is in the game on race day.”

Expect Caroline and Jodie to have razor-sharp focus on getting the most out of their race-day performances.