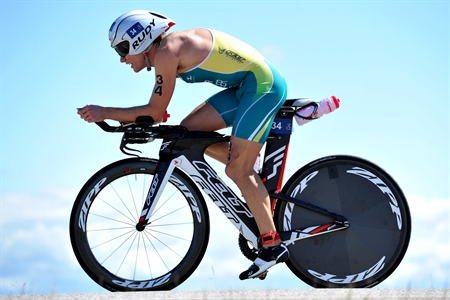 Josh Amberger has set his sights on a three-peat at this Sunday’s Ironman 70.3 Port Macquarie.

The Bahrain Endurance Racing Team member first won the race in 2013 in his transition to non-drafting events. His trademark strong swim and bike set him up for an uncontested run. His title defense last year ended in a thrilling sprint finish where he won by 30 seconds.

Amberger will face a slew of fellow fast Australians, Kiwis, and the odd Finn and Swiss. He says, “I love racing in Port Macquarie. It’s tough racing on this course, but I know how to get the job done.”

While most of his fellow Bahrain Endurance teammates have been in Hawaii the past few weeks to race or spectate at the Ironman World Championship, Amberger has been stuck into training in his native Queensland. He reveals, “Instead of taking the pilgrimage to Kona, I decided to stay at home, focus and work hard to continue my winning streak. My fitness is good, and I’m looking forward to toeing the line on Sunday.”