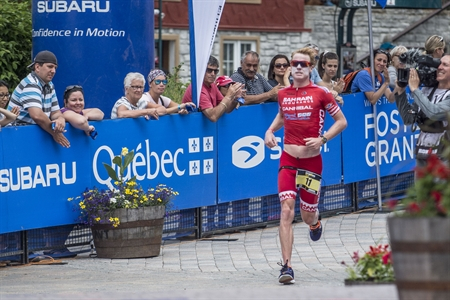 Sebastian Kienle of the Bahrain ENDURANCE 13 toes the start line at the inaugural Challenge Heilbronn. He has raced parts of this course before in its former iteration as the City Triathlon Heilbronn, a 2-kilometer swim, 70-kilometer bike, and 15-kilometer event that attracted many of Germany’s elites. In previous years he has tested himself at the Kraichgau-Heilbronn double before heading off to Frankfurt for the Ironman European Championship. The plan has not changed despite Heilbronn becoming a half distance race. Kienle expects to better his second-place podium finish from last year.

Kienle says, “Challenge Heilbronn is the last piece in the puzzle to defend my title at the Ironman European Championships in Frankfurt. It is just 30 minutes from where I live. It is great if you don’t have to travel a lot for a world class field like this — with Michael Raelert, Nils Frommhold, Andi Dreitz, Andi Böcherer and Maurice Clavell, there is a lot of German talent in the race. Ronnie Schildknecht and Giulio Molinari add a little bit of international class to the field. I would like to have one last very hard effort before Frankfurt, and I think I will have to make that effort.”

Across the pond, Paul Ambrose of the Bahrain ENDURANCE Racing Team has entered Ironman 70.3 Mont Tremblant. He says, “I raced the Ironman a few years ago when it was the North American Championships and loved the course. I’m excited to go back for the 70.3.” Ambrose has fixed his sights on Ironman Canada at the end of July. “I really wanted to get a few racers in before I started another Ironman block. Mont-Tremblant fitted in perfectly.”