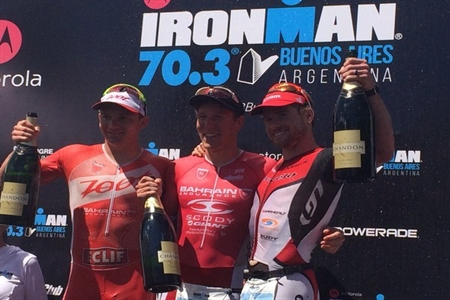 Massive weekend of racing around the globe

It was a massive weekend of racing for the Bahrain Endurance Team with stellar performances in Asia Pacific, South America, and the Middle East.

Caroline Steffen extends her podium streak at the half-ironman distance with a win off the front at the Ironman 70.3 Subic Bay. The day was not without its challenges as she and Radka Vodickova raced neck-and-neck through the swim and bike. It was only on the run that the Warrior Princess asserted her dominance and won with a five-minute margin.

She said, “It was an unusual day, I was ahead in the swim, I was able to stick with her [Vodickova]. I joined a new squad back home two months ago, it seems to be working pretty well, I was very happy with my swim. I had a bit of a struggle on the bike today, which was unusual for me because usually that’s my strength, so I just made it a run race. It’s triathlon, it’s swim-bike-run, you just take whatever you can get on that day and having run and swum well I’m really happy.”

The Sunshine Coast-based Swiss star will next head to the US for more racing before coming back to the region to defend her title at Ironman 70.3 Vietnam. She said, “My main goal this year is the [Ironman 70.3] World Championships in my back yard, and I thought I better get over to the US and race those girls who are gonna show up in Australia in September.”

Over in South America, Sam Appleton and Ben Hoffman locked out the top two podium spots at Ironman 70.3 Buenos Aires. Appleton was first out of the water leading a pack that also included Hoffman. On the bike, Hoffman took the lead with Appleton never far behind. The race was decided on the run, which came down to a sprint finish where the young Australian came out ahead of the American by a mere six seconds.

WTS Abu Dhabi played host to a retinue of Bahraini racers as His Highness Shaikh Nasser Bin Hamad Al Khalifa took on the maxi race (1.5-kilometer swim, 80-kilometer bike ride, 20-kilometer run) and finished second in his age category and ninth overall. “The ambition to achieve great results is growing,” he said. He also lauded the Bahraini participants in the race, including the National Guards Team. Team protege Abdullah Attiya did the sprint race and finished second in his age group and fourth overall.