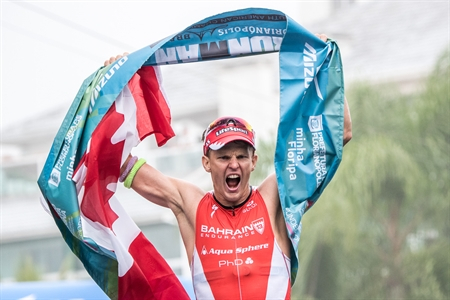 McMahon, Gomez back on top

Bahrain Endurance’s team of champions delivered in both short-course and long-course triathlon this weekend, with Javier Gomez clinching the ETU European Championship in Portugal and Brent McMahon dominating the Ironman South American Championship in Brazil.

Gomez’s win in Lisbon came as a surprise to him. “Very happy to grab my 4th European title,” he said of what was his first real test after withdrawing from the World Triathlon Series circuit to recover from injury.

The five-time ITU World Champion and Olympic silver medalist was placed 9th after the swim. After figuring in a bike pack breakaway that saw him race to the second-best bike split, Gomez ran a third-best 31-minute 10K to seal the win.

One of Spain’s top bets to win the gold medal at the 2016 Olympics, Gomez will continue to tick the right boxes as he gets ready for the race of his life in Rio.

McMahon produced his third sub-eight hour performance and set a new course record, smashing the competition in Florianopolis for his second Ironman title.

The former Olympian was well-placed in third out of the swim. Breaking away on the second lap of the bike leg, he clocked a 4:11:54 bike split and built a massive lead of 10 minutes and 12 seconds going into the run. He backed that up with a 2:42:52 marathon, finishing with a 10-minute winning margin.

It was a new record for the fast Ironman Brazil course and a new personal best for the Canadian. It was also only 12 seconds off the fastest ever time for an Ironman-branded race recorded by Belgium’s Marino Vanhoenacker at the 2011 Ironman Austria.