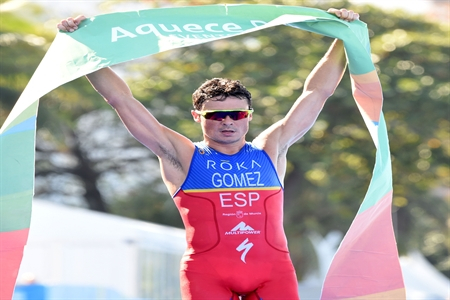 Brent McMahon is once again on the hunt for a speedy finish and a title at the Ironman South American Championship Brazil. The Canadian with the fastest Ironman debut time recorded a sub-8 hour third place last year in Florianopolis, and he is back to win.

“I have been successful on this course last year and know what I can do even better this year,” says the two-time Olympian, who approached his final preparation for the event with excitement and focus. “I had a great winter of pushing to new fitness levels and touching on speeds in running from a few years ago. So I feel strong but also like I have a renewed leg speed heading into this event.”

Javier Gomez is racing again this weekend, this time at the Olympic distance ETU Championship in Lisbon, Portugal. “All races prior to Rio will be a step forward to reach my best form in August,” says the five-time ITU world champion who’s got his heart set on finally achieving a gold-medal finish at the 2016 Olympic Games.

Last week’s sprint triathlon for his French club was a warm-up. “This race will be a more serious test for me, as it is an Olympic distance event and an important race to win,” he adds. “I am excited to be racing again and to see how my fitness is progressing.”