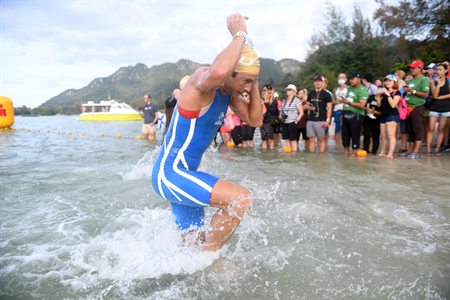 A flat tire may be all that stands between making a champion or going home empty-handed. Bahrain Endurance 13’s duo of athletes experienced both sides of this coin over the weekend as Fredrik Croneborg’s title defense at Ironman Malaysia quickly ended while Terenzo Bozzone made quick work of the Ironman 70.3 Los Cabos.

A serious puncture in the 100th kilometer on the rolling hills of Langkawi’s bike course had Croneborg sidelined for 30 minutes while waiting for mechanical support. With the eventual winner racing towards a course record, the delay dashed the Swede’s hopes of repeating his triumph from last year — but not his will to finish what he started. “My ambition to race for the title ended early but still proud to earn another finish medal in this race, even if it was my slowest to date,” Croneborg said. “Thanks to all the people cheering me on during the race and the organizing team for a great job.”

While checking his tires on race morning, Bozzone found one of his tires punctured from the pre-check in ride. “I had to use my race spare then and just pray that nothing happened during the race,” the Kiwi recalled. Fortunately, the rest of the race was uneventful, with Bozzone taking a wire-to-wire win with the fastest swim, bike, and run splits on the day.

“The legs had good spring in them and I was able to get what I needed out of the run to hopefully bring up my form a little for the Island House triathlon next weekend and carry that through to Bahrain 70.3,” he concluded.

Bozzone joins Ben Hoffman and Holly Lawrence to take on the Island House Tri in the Bahamas, hoping to improve on their respective finishes from last year. Notably, Bozzone finished 4th and Lawrence 3rd.

His Highness Shaikh Nasser Bin Hamad Al Khalifa also has high hopes for winning his age group at the Ironman 70.3 Middle East Championship in Bahrain after placing sixth overall and second in his age group at the Dubai International Triathlon Championship. “I am very happy to achieve this positive result in this international championship, which featured a pool of professional and amateur players. There are several factors contributed to this achievement, including the support and backing of His Majesty King Hamad Bin Isa Al Khalifa, and HM’s continuous follow-up to my preparations prior the Championship, which fueled me with enthusiasm.”