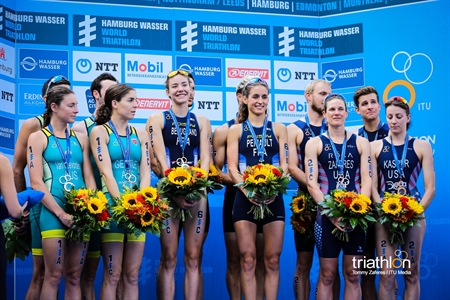 Ashleigh Gentle (AUS) and Ben Kanute (USA) both played pivotal roles for their countries in the ITU Triathlon Mixed Relay World Championship in Hamburg which saw both on the podium. France – gold, Australia – silver, USA – bronze.

She handed over to a revitalised Rio Olympian, Newcastle’s Aaron Royle who laid it all on the line to keep the Australians in the hunt.

“We worked together really well as Team Australia and that paid off,” said Gentle, “You have to fight for every second and we saw what can happen with Jake’s final sprint.”

Ben Kanute took the baton on the second leg after a brilliant start from Kirsten Kasper. Kanute then joined forces with Johnny Brownlee (GBR) and Dorian Coninx (FRA) to hunt down Germany’s Jonas Schomberg as he handed off to Katie Zaferes.

Kevin McDowell anchored for the team and looked set to have the silver sewn up, but an explosive Jake Birtwhistle (AUS) made up 30 second over the final 1.5km run to out sprint him and relegate the US to bronze.