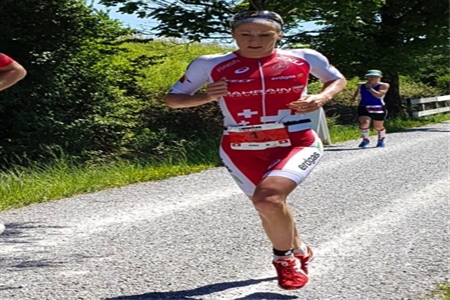 Daniela Ryf made it four in a row at Ironman 70.3 Switzerland, clinching the win in Rapperswil on an all-Swiss podium.

The dual Ironman world champion led out of the water, then rode conservatively before reclaiming the front of the race at 14 kilometers into the run leg. She crossed the finish line with a lead of more than three minutes, a successful comeback from a back injury. “Very happy with the win,” she said. “Back held up well.”

Alistair Brownlee also defended his title at World Triathlon Series Leeds, remaining undefeated at his hometown race. Though the two-time Olympic champion exited the water further behind than he would have liked, a strong and aggressive bike ride working with his brother Jonathan allowed them to gain the lead. Despite racing three half-distance triathlons in a row Alistair showed he had lost none of his top end speed, outrunning his brother to finish ahead yet again. “I think it’s an all-round triathlon today: you need to be able to swim – my swim wasn’t great, I was 5th/6th and I had to move up – you need to be able to ride hard, tactically and technically, and do a good run at the end. There’s not that many races in the world that require you to race three disciplines,” said Alistair.

Holly Lawrence took third at Escape from Alcatraz on a modified course after the swim leg was cancelled. High winds in San Francisco Bay meant no small craft and water safety could be out on the course, turning the legendary race into a duathlon. Only 90 seconds separated Lawrence from the top spot, yet the Ironman 70.3 world champion still took away a positive from her finish, which broke a winning streak she had begun at the same race last year. She said, “To be honest, I was waiting for my winning streak to be over. I think that kind of takes the pressure off a little bit.”

While David Plese pulled out of the Keszthely Triathlon due to mechanical failure, he is still on track for Ironman Austria as part of his Kona qualification campaign. He will race alongside Jan Frodeno, who will validate his world championship slot. With Daniela Ryf and Ben Hoffman as automatic qualifiers thanks to their African Championship wins and Brent McMahon and Terenzo Bozzone inside the top 50 KPR rankings, Bahrain Endurance will definitely represent on the Big Island in October.