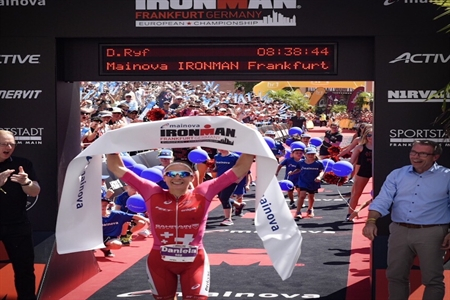 It is their second victory in tandem at this race. The first was in 2015, en route to their dual maiden wins at the Ironman World Championship. Now with multiple world championships under their belts, the two Bahrain Endurance athletes are looking fit to repeat the feat.

With the water temperature at 23 degrees Celsius, it was a non-wetsuit swim for the pros. Josh Amberger got the jump on the rest of the men’s field, emerging from the 3.8-kilometer swim with a clear lead ahead of Frodeno and the chase pack which included reigning Ironman world champion Patrick Lange. Frodeno took his time, only putting the hammer down in the last eight kilometers of a 185-kilometer cycle course to come into the transition area on Amberger’s heels and just ahead of Lange. Here Frodeno took control, blasting into first place and never relinquishing the lead through the marathon, setting a new run course record of 2:39:06. He jogged across the finish line in 8:00:58 to thunderous applause from his German compatriots.

Frodeno commented at the finish line, “It was a game of patience, to be honest. I mean, somewhere halfway through I got so frustrated, I did try to attack, I lost a bit of patience and rode hard for half an hour. But then again I couldn’t shake the guys. You have the two Patricks — with a C and without a C [Patrik Nilsson, who overtook Lange for second] — and you kind of try to make sure that you don’t chauffeur the two best runners of the sport into the second transition zone. And then I just had to play the game and was secretly praying Daniela doesn’t ride up to us.”

He had achieved what he had set out to do. He said, “I came here with a bit of a mission and I’m super happy that it worked out… I’m preparing for Hawaii, it’s the biggest race and the biggest challenge is to come to this race and beat Patrick [Lange] at his own game, the second half of the marathon. And that was my intention and that’s what I did.”

Meanwhile, Ryf was in a league of her own. After exiting the swim in second place to Sarah True, Ryf began pushing the pedals to build a lead of almost half an hour ahead of her nearest competitor. Despite the new bike course adding five kilometers to the traditional 180 of an Ironman, Ryf clocked in at 4:40:55, nearly five minutes faster than the old record set by fellow Swiss Natascha Badmann. At this speed, she also overtook all but seven of the men’s field on the bike. She then passed one more male athlete on the marathon to place seventh overall and top the women’s podium with a time of 8:38:44.

Throughout the race, Ryf had appeared calm and in control. She said, “I like to race and it doesn’t matter how big the race is… In the end racing is about pushing yourself and putting your boundaries higher and that’s what I tried to focus on. If it’s a small race or a really big race like here, I think it’s the approach, how you look at it. And that helps me to stay a bit more relaxed.”

Even with a near-flawless performance, Ryf still seeks to improve. She admitted, “I always try to improve and I hope it’s just the beginning. I actually lost my drink bottle on the bike and by the end of the bike I was like, my energy levels were about to drop, so I still want to find out how fast you can go. Today was definitely one of the best performances I showed.”

With three months to go before the Ironman World Championship, the two champions have locked in their spots on the Kona pier and are in peak shape to put in the last block of work for the Big Dance.

Frodeno stated, “I do have a bit of aggression that I’ve managed to somehow channel this year and you know, really I’m glad that things have worked the way they have after a somewhat tough season. I’m looking forward to the big prep for the biggest race of the year.”