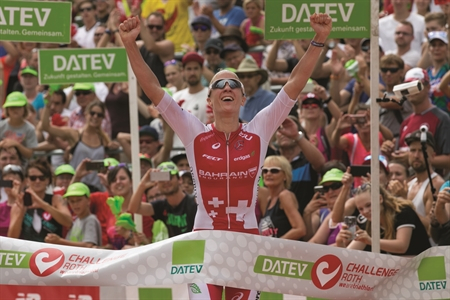 To win Challenge Roth for a second time, Daniela Ryf overcame soaring temperatures, gusting headwinds, and a back injury that had limited her training in the lead-up to the iconic triathlon.

Racing against a field of accomplished long-distance competitors at the race, the Swiss speedster however led the race from the gun and never looked back. By the finish tape, Ryf had a clear 11-minute lead over the rest of the field to win in 8:40:33. It may not have been enough to breach Chrissie Wellington’s world record which still stands at 8:18:13, but it was more than enough to hold off the challengers to the Roth title. She also broke Wellington’s bike course record by one minute, and set the tenth-fastest women’s time over the iron distance.

While Ryf clocked sub-4:05 minute kilometers at the start of the marathon, by the 15th kilometer on the new run course her lack of preparation started to tell. “The legs got heavier and heavier and I was not sure if they will carry me till the finish line. And at the finish I felt exhausted, but the amazing atmosphere in the stadium made me feel like I was born again,” she said.

The reigning world champion won the only way she knew how: by giving everything she had. “I’m really happy I raced even knowing the record would be nearly impossible,” Ryf said. “More important than records is enjoying the race, challenge yourself and bring out the max what you can that day.”

Bahrain Endurance 13 teammate Terenzo Bozzone finished in 8:11:34, taking fifth place in his maiden appearance at Challenge Roth. The Kiwi was in the mix on the swim and the bike, but a foot injury had restricted his running, which was the difference.

Both athletes overcame physical challenges to perform the best they could at the world’s largest long-distance triathlon. They now turn their focus toward preparing for the Ironman World Championship in October.