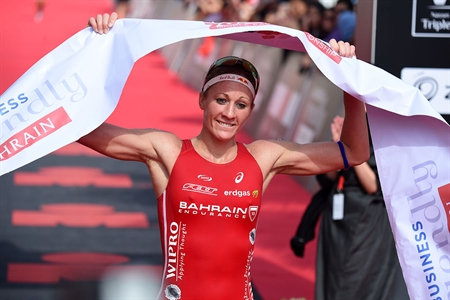 Daniela Ryf claimed the crown at the Ironman 70.3 Middle East Championship in Bahrain today, winning not only the title but also making history as triathlon’s first “million-dollar baby”.

The Ironman 70.3 Middle East Championship was the last of the three races comprising the Nasser Bin Hamad Triple Crown series, where the athlete who wins all three is awarded a one million-dollar bonus. The Swiss star’s wins at Challenge Dubai and the Ironman 70.3 World Championship set up this weekend as one to watch, and Ryf delivered by creating a gap on the bike and building an insurmountable lead on the run after the day’s swim was canceled due to strong currents.

Ryf also ends her stellar year undefeated and a world champion twice over, having also added the Ironman World Championship to her list of accolades.

“The last six weeks after Kona, I put my head down toward this race, and I’m so happy I could finish strong and take this win,” she said. “I’m so grateful for this opportunity. It’s been a great journey and I’m also grateful for the support from my team… And of course, my coach. He supported me so much and the last weeks were not easy. I was really struggling to keep the focus.”

Ryf’s compatriot Caroline Steffen made it a one-two punch for Bahrain Endurance on the women’s podium, making her pass for second in the final kilometers of the run. It is her second silver in two weeks after her runner-up finish at Ironman 70.3 Western Sydney and concludes this year’s podium streak. “I never did back-to-back races so that was a good experience. Being not healthy all week long didn’t really help but I learned a lot this week and I think I absolutely got the best out of me.”

Steffen gave full credit to Ryf for the win. “She showed an incredible race. She came 100% prepared but of course when you go for one million dollars you definitely have to do that. I can be absolutely happy with second.”

James Cunnama claimed bronze on the men’s podium, playing a smart race that saw him stay in contention from start until finish. While he admits that the staggered bike time trial start with no warm-up altered race tactics, he said he finished fairly strong on the bike and felt good for the run. “It was just a matter of focusing on my own race until the end. I’m very happy with where I ended up; I had no real expectations at this time of year.”

It has been a massive weekend and an even more accomplished year for the Bahrain Endurance Team. “Super proud to play a part in the richest day in our sport’s history,” said team manager Chris McCormack. “Bahrain is changing the professional landscape of our sport.”