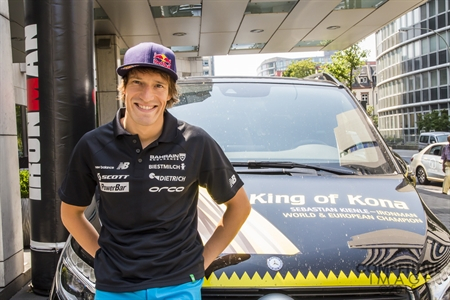 Ironman and Ironman 70.3 World Champion Sebastian Kienle has been revealed to be the final member of the Bahrain Endurance 13 Team. Over the past week during the team’s launch, there had been much speculation about who the thirteenth member would be.

With thirteen stars on the Bahrain Endurance shield and twelve athletes already announced, His Highness Shaikh Nasser Bin Hamad Al Khalifa named Kienle as his star number 13 in a video released after this weekend.

Team manager Chris McCormack says, “We tried to keep it a surprise to the end, but there’s no one else who could be a perfect fit on a team of superstars. He’s the current Ironman World Champion, two times Ironman 70.3 World Champion, Ironman Europe Champion, and the most lethal bike rider in the history of the sport.”

Kienle believes the Bahrain Endurance 13 is the strongest triathlon team ever, and wants to take part in making it the most successful as well. He states, “It is an honor to be part of this great group of athletes. I believe that the members of the team are great role models for others to start to have a more active lifestyle. I think there is great potential in the Middle East. I like the vision behind the team, and sport can do a lot of good things in the world.”

Kienle joins a team that has racked up great results this weekend to support the official launch. Sam Appleton won the Byron Bay Triathlon, while at Ironman 70.3 Mallorca Daniela Ryf scored an overall win and His Highness Shaikh Nasser finished 13th in his age category; both have qualified for the Ironman 70.3 World Championship to be held in Austria. At the inaugural Ironman 70.3 Vietnam, James Cunnama and Caroline Steffen stood atop the podium, while Terenzo Bozzone went three-for-three with another podium finish from three consecutive weekends of racing.